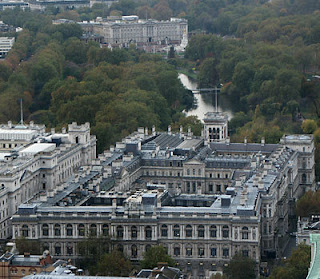 "Foreign Office officials worked to undermine Tony Blair's pro-American policies at the United Nations because they had been 'infected' by French and German views."

That is the view of to the former United States ambassador to the UN, John Bolton, as conveyed by The Daily Telegraph. But, while the confirmation is nice to have, it is about as surprising as learning that the Pope is a Catholic. As does the US State Department, the Foreign Office always undermines the government of the day. That is what it does.

Deliciously, though, Bolton names names, singling out Jeremy Greenstock, the British ambassador to the UN in the run-up to the Iraq invasion, and his successor Sir Emyr Jones Parry, who is still in the post. "Greenstock was a lot of the problem," he says.

Warming to his theme, Bolton tells us that British diplomats were vehemently opposed to much of what Mr Blair wanted to do. "On Iraq in particular, they didn't like it. It reflected the increasingly Eurocentric view of the Foreign Office, where they're just not as Atlanticist as they used to be."

For those of us who have long concluded that the Foreign Office has become a branch of the EU Commission – a London sub-office of Brussels - we can thus immediately accept the validity of Bolton’s comment that, "This is probably the biggest split between the Foreign Office and the British people as a whole, who remain basically at least somewhat Eurosceptic."

Foreign Office officials, he says, were more willing to listen to their European counterparts. "They're very Brussels-oriented and they were hearing from the Germans, the French and whatnot about their opposition and I think it infected them."

Debunking another canard, oft wafted about by the left (and right) wing "antis", Bolton also takes on the "poodle" slur. He is full of praise for Blair's steadfast support of Bush over Iraq and the war on terror. "The idea that somehow he's a poodle or second-class citizen - nobody in this administration has thought that. Nobody. People had a lot of respect for him, even when we disagreed on issues like the environmental questions, for example."

Says Bolton, "The difference is that he was determined to co-operate to achieve success, whereas some others, like Chirac, were just obstructionists. They wanted to show they weren't Americans. Well congratulations, they succeeded. But are we more secure because of that? I don't think so."

The scary thing, however, is that so many so-called Eurosceptics take exactly the Foreign Office line on Iraq and the war on terror, little realising that they are reinforcing the very Eurocentric policy they profess to oppose. No wonder the messages we are getting are so muddled.