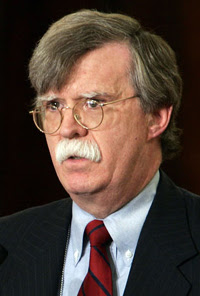 It is not often one whoops with joy listening to the BBC Radio 4 Today programme, but Jon Humphrys interviewing John Bolton, former US ambassador to the UN, this morning was a sheer delight. (You can listen to the piece here.)

From Humphrys we got the usual BBC droning, with forthright responses from Bolton. Eventually though, after a run of sneering negativity over Iraq, Bolton had had enough. What did it was the suggestion that the US was "a busted flush", Humphrys calling in aid George Soros.

"Are you kidding me!", responded Bolton. "This is a man of the extreme left. I am sure you will find a great deal in common with him, as would many others on the continent."

A sniffy Humphrys was not going to take that lying down though. On the attack, he demanded: "Do you make the assumption then that because one asks questions – perfectly valid questions about the conduct of American policy - one is on the extreme left?"

Bolton was unfazed: "I can see it from the content of your questions and the perspective from which you're coming and from the direction that your questions are taking. If you tell me you're a conservative, I would be happy to accept it."

That really got Humphrys going: "I would tell you that I'm neither conservative, nor left wing not right wing, nor middle wing, because…"

Attempting to muster all his majesty, Humphrys was almost squeaking in indignation: "I have an awful lot of views, Ambassador, a view for every subject under the sun but I don't express them during the course of my interviews. I ask questions… That's what interviewing is about... You'll have heard of a thing called devil's advocate… Maybe they don't do it like that in the United States, but…"

"I know, you're a superior Brit as well!" rejoins Bolton.

You can see why he really pissed them off at the UN.