Believe what you want to believe 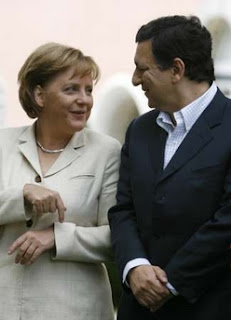 Read the Financial Times for its account on the Sintra meeting over the weekend and you will almost certainly start to come away with the impression that a new EU treaty is set fair for this June.

The newspaper has Merkel ready to launch a new phase of diplomacy to salvage a more modest treaty from the constitutional wreckage, with senior officials from the EU's 27 member states gathering in Berlin to discuss progress, before the German chancellor starts hammering out deals with heads of government individually.

But then we get to the small print and even the Financial Times is telling us in a round about way that it is not going to happen. "Already the strategy is clear," the paper writes. Merkel "wants the June summit to agree all but the finest details of a new treaty to replace the constitution …focusing on modernising EU rules and institutions."

In other words, the German chancellor is willing to get nearly there, but is conceding that the final agreement will elude her.

José Socrates, the Portuguese prime minister, who was also at the talks, is more specific. He tells the Financial Times that he is "confident" of a positive outcome at the June Council, but then refuses to set out a timetable for the subsequent Intergovernmental Conference (IGC) under his presidency, saying only that, "I would prefer it to be done in a rapid way."

Thus we have it spelled out. Merkel will give the European Council a "starter" document and then the "colleagues" will vote – and vote they must – to convene an IGC to hammer out the final details (she hopes). So there will be no signing in June.

Whether Merkel is also being a tad optimistic also remains to be seen. Without saying exactly that, a piece produced by Reuters, published by IHT seems to indicate precisely that. With less than six weeks to go until the German chancellor presents her "road map" to the European Council, officials are only prepared to say that there is a "rough consensus" for a cut-down version of the EU constitution.

However, differences remain. Britain, supported by the Dutch and others, wants to remove the Charter of Fundamental Rights from the document, a move that some of the 18 countries that ratified the initial draft consider unacceptable.

Poland remains adamant that a new voting system, which was hammered out in arduous negotiations and approved by Warsaw's previous government, is unfair and should be looked at again. The Czechs, Dutch and the Poles want to give national parliaments more power to block EU legislation and Sarkozy, "in a nod to French fears about globalisation", wants the social dimension of the bloc to be given greater emphasis in the treaty. And then, the British object and have problems with a separate Dutch push to spell out the limits of further EU enlargement.

This, of course, is before the IGC even starts. In the way of things, once that process starts, all sorts of additional items get lumped in. Typically, therefore, before the options are closed down, the discussions tend to get wider, as each of the member states set out their positions.

However, the "colleagues" remain optimistic – they always (or usually) are - and the IHT thus reports that they are expecting to work to a meeting (summit) be held in the second half of 2007 to finalise a text. That will be when Portugal holds the presidency.

So, there we are. Many people are determined to have Blair going to Brussels in June to sign up to a new treaty. About them, the only sensible comment is that they will believe what they want to believe. But the facts, as we know them, now point with even greater clarity to an agreement no earlier than the second half of 2007. But, with the number of issues outstanding, it could very well be much later than that.