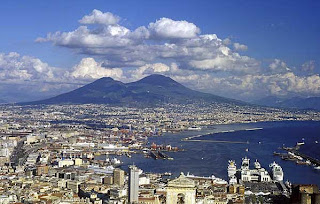 The village of Herculaneum, at the foot of Vesuvius, near Naples, has been evacuated in anticipation of an "imminent" eruption. According to experts, there is a "one-in-two" chance of the volcano erupting in the next few years. They are warning that 300,000 people could die.

Vesuvius erupted eight times in the 19th century, and in 1906, 1929 and 1944, but has been dormant since. "The rule is that the longer the period of inactivity, the bigger the eruption," said Augusto Neri, of the National Geophysical and Vulcanology Institute, cited by The Daily Telegraph .

So seriously is the threat taken that, four years ago, the city council launched a £500 million compensation scheme to move the 550,000 people who lived in houses inside the "red zone", closest to the volcano. A law was also passed forbidding further construction within 1.5 miles of Vesuvius.

However, that has not stopped the regional transport authority building a £20 million reconstruction of Thomas Cook's 19th-century funicular railway, starting at Herculaneum and snaking up to the summit. And the source of funds for this foolhardy project which, it is reported, is now largely under the grip of the mafia? Ah! The European Union.