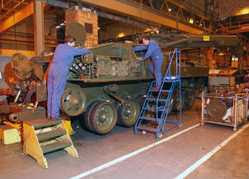 "This is Tony Blair's paper army," one senior officer said. "We just don't have the equipment to train our men. It is all down to the ghastly Gordon Brown. We're absolutely dreading him taking over as prime minister."

This is what passes for sensible comment in The Sunday Times today as defence correspondent Michael (Mick) Smith unveils a leaked report on the state of the Army. We are told it reveals a force that has run out of spares to keep its tanks and armoured vehicles going. The army's "cupboard is bare", it states.

Right on cue, however, the Matt cartoon in The Sunday Telegraph puts it in perspective. A little boy, having smashed a window with a football, is told by his friend, "Don't worry, soon everything will be Gordon Brown's fault". As so often, Matt says it all.

That, unfortunately, is the state we are in. Having suffered (or tolerated) a decade of personality politics, and a highly interventionalist prime minister, every problem – no matter how complex - is reduced finger-pointing of the most simplistic kind.

For sure, Mick Smith points up a problem, but the lurid "spin" he gives it is more redolent of a "red top" than it is serious journalism. The Army, he writes, is "critically short" of tanks and guns, with regiments in the UK and Germany stripped bare in a "desperate" effort to provide equipment for troops in Iraq and Afghanistan.

This is according to his "leaked document", but it is a travesty of selective reporting.

Not least, the report comes in two parts. Firstly – the part on which Smith concentrates - sets out the problems (and "what we are doing about them"). But secondly, it offers a heading, "Equipment good news", under which is offered the comment, "There is much good news". About this, Smith's piece is totally silent.

Even then, the thrust of the "bad news", is not as Smith paints it. What is being recorded is that absolute priority is being given to operations - a measure that is largely succeeding, eliciting the comment that, "The Force is well equipped on operations".

The result of that, however, has been that the UK pool of equipment, which would otherwise be available for training, has been exhausted – hence the comment, "the cupboard is bare". Therefore, Divisions are enjoined not to hoard equipment that they do not need and to hand it over to units undergoing pre-deployment training.

Needless to say, Smith's truncated version gives the opportunity to invite a comment from the opposition, so we have the ritual barb from the Conservatives, accusing Blair (not Brown, one notes) of betraying frontline troops with "empty promises" that they could have whatever equipment they needed.

Liam Fox, the shadow defence secretary (possibly on his way out), gets his renta-quote, saying: "We believe Gordon Brown has underfunded operations in Iraq and Afghanistan by about £1.5 billion and as a consequence we are seeing the salami-slicing of the army."

But, as we have observed many times, such as here, underfunding per se is not always the issue. More relevant, as we pointed out, most recently here, the Army been caught out by the toll exacted by the aggressive environment and the pace of operations, with overly complex equipment which was never designed for the uses to which it is being put.

This, also, is a problem affecting all armies – the US forces, the Canadians and the Dutch have all reported similar difficulties. Adapting to the new conditions requires a major re-think on the type of equipment we buy, with a strong emphasis on durability and ease of maintenance.

It is there, however, that we see the incurable parochialism of commentators like Mick Smith, and the paper he works for. Not only does he present the problem in terms of political personalities, he fails to explore the international dimensions. And then, saying nothing about the broader strategic demands on our equipment, he reduces the whole issue to a shallow Punch and Judy show.

If we are to have an intelligent debate on defence, he (and opposition politicians) need to do much better.