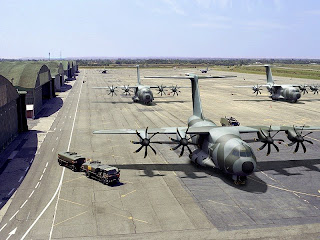 The European Air Transport Command (EATC) – the putative EU Air Force, agreed in principle by France and Germany in June 2001 – has acquired a new member, Holland, adding to the two original members plus Belgium, to make a group of four members.

The Netherlands Ministerie van Defensie signed up on 23 May, agreeing to the basis on their military transport aircraft should be pooled and how to manage the Command, which is based in Eindhoven in The Netherlands. However, the site, for the moment, will not become a central base.

According to Defense Industry Daily, the aircraft from the participating nations (mostly C-160 Transalls in France and Germany, plus some C-130H Hercules transports in Belgium & Holland) will continue to be stationed and maintained at their own air bases.

As presented, however, reports suggest that the command is newly formed but the operation was actually agreed in June 2001, initially as a European coordinating cell for air transport. It started operations in Eindhoven in June 2002 and Germany and France continued to pursue goal of European air transport command, as a model for other joint commands.

Three of the four countries now involved have ordered the A400M (France - 50, Germany - 60, Belgium - 7) and, says DID while the Dutch have made no firm decision on replacing their ageing C-130H-30s, their membership of the Command begins to weight the scales for that eventual decision.

And of course, DID adds, it also furthers the objective of creating a parallel EU military structure outside of Nato – which was the intention all along.