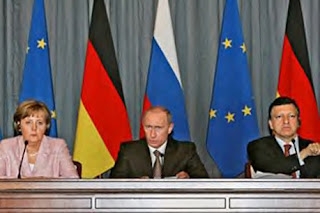 Not the least of the puzzles that surround yesterday’s EU-Russia Summit, which ended with a spectacularly “frank and open” press conference, is why it took place in Samara, a fairly large city on the Volga, whose history goes back to the sixteenth century. In fact, the Summit was outside Samara, in a sanatorium called “Volzhsky Utyos” (Volga Cliff, a direct reference to a popular Russian song).

The one thing everyone agrees on is that the EU-Russia Summit was unsuccessful. Whether it shows that there is a crisis in the relationship or merely business as usual has divided opinion. Nor is there any agreement as to whether the EU or Russia won the battle of words.

There does seem to be a general consensus in the media that Russia is now showing her renewed strength and vigour. We beg to differ. A long piece on Russia, EU and what it might all portend is here.