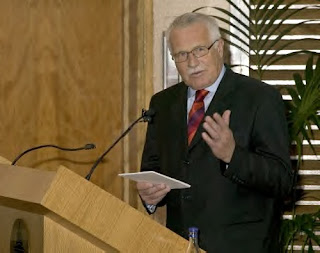 It seems that there is one politician in Europe who has understood the essence of the European project and why it is not a good idea for any of its members. Sadly, that politician is not one of ours. Nor is it President Sarkozy or Chancellor Merkel. In fact, I gave the game away in the title. I am talking the only East European politician who genuinely believes in democracy and the free market: President Vaclav Klaus.

On May 18 he gave a speech in Prague that summarized his reservations. After a more or less justified boast of the Czech Republics performance in most of the post-Communist years, he came to a discussion of what was wrong with the present situation.

In the last decade the Czech economic performance was affected by two external factors:

- the economic growth in the rest of the world, especially in our main export markets;

- the constraints connected with our membership in the EU, or to put it more explicitly, with economic growth restraining institutions and economic policies in the EU.

Of these, he continued, the second was more important and more harmful. One could and did adjust to the first but the EU with its growth-restraining institutions has become a real problem, especially as the gain that the Czech Republic may have had - the opening up of the markets - was achieved before membership.

(Of course, it could be argued that western markets would not have been opened but for the negotiations for membership but, as we have written many times before, that was going about it the wrong way. The EU could not envisage any relationship with the former Communist states but their membeship when the existing members were ready. This was not a particularly helpful and stabilizing attitude either for the old or the new members.)

Going on, President Klaus explained why he did not hold with the way European integration was progressing:

The past 50 years of the European integration have been usually considered to be a success, even if it is very difficult to statistically measure it or to prove it. We all know that there have been many other unique, unrepeatable historical as well as much more important evolutionary global factors which were influencing the economic (and not only economic) performance of the EU member countries at the same time. This is not very often explicitly discussed and recognized. All progress of that period is usually attributed to the existence of the EU.

What I consider important is the fact that the concept (or model) of European integration has been fundamentally changing over time. With the benefit of hindsight, and with the courage to generalize, I see two different integration models (or methods of integration) in Europe in the last 50 years.

The first one I call the liberalisation model. It was characterised by an inter-European opening-up, by the overall liberalisation of human activities, by the removal of various, in the past created barriers at the borders of countries as regards the movement of goods and services, of labour and capital, as well as of ideas and cultural patterns. Its main feature was the removal of barriers and its basis was intergovernmentalism.

The second one, which I call the interventionist and harmonisation model, is characterised by enormous centralisation of decision-making in Brussels, by far-reaching regulation of human activities, by harmonisation of all kinds of “parameters” of political, economic and social systems, by standardisation and homogenization of human life. The main features of the second model are regulation and harmonisation orchestrated from above, and the birth of supranationalism.

I am frustrated that the people in Europe do not see this fundamental metamorphosis sufficiently clearly and especially do not think about its inevitable consequences. I am angry with politicians and their fellow travellers that they do maximum to hide it and to make it fuzzy.

I am – as it is well known – in favour of the first model, not of the second. I am convinced that the unification of decision-making at the EU level and the overall harmonisation of societal “parameters” went much further than was necessary and than is rational and economically advantageous.

I consider it wrong. I am not satisfied with making only cosmetic changes. I am, therefore, in favour of redefining the whole concept of the European Union.

Read the whole speech. It is not long and well worth it.