Another civil war that is not happening 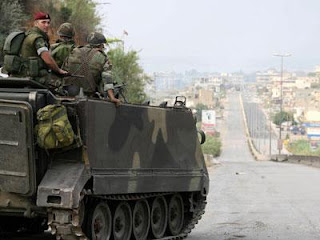 It has been the view held by this blog for some time and certainly since last summer that the presence of Hezbollah as an armed militia, supported, financed and equipped by Syria and Iran would, in the not so long run, be more of a problem for the Lebanese than the Israeli government.

The same can be said for the extensive Palestinian "refugee" camps in which generations have grown up in the certain knowledge that there was no way out of those places for them in Lebanon (or any other Arab state) and have nurtured an assumption that somewhere in Israel there is land that is somehow "rightfully" theirs.

These camps have been nurturing various Islamist, terrorist and extremist groups, many of which are linked to Al-Qaeda and all of them supported, financed and equipped by Syria and/or Iran.

The news today and yesterday has been that the Lebanese government and army have had enough and tanks have moved in on the Nahr al-Bahred refugee camp. There has been at least one explosion in the Christian part of Beirut (one assumes that was not the Lebanese army) and the situation is rapidly worsening.

Fausta has what looks to me like the most up-to-date round-up of news and analysis, though more might have happened while I have been writing this.

A couple of her links are worth looking at. One is the BBC World Service, which is headed Lebanon clashes 'kill civilians'. Why the quotation marks? Were they not killed or were they not civilians? Or are we to assume that if the Lebanese army moves in to clear out some of the Palestinian refugee camps then they are fighting militants (never terrorists) and if it is Israel then everybody is miraculously turned into "innocent civilians"?

As the great and sorely missed Bernard Levin used to say, "I ask only because I want to know".

Another of Fausta's links is to an excellent summary in the International Herald Tribune. It is not a pretty picture and it is clear that the problem has largely been created by Lebanon itself in the refusal to let the Palestinians off the reservations. Curiously enough, the fears that have motivated their actions are similar to those expressed by the Israelis and demonstrated by the Jordanian army in 1970 - 71.

Is there not a UN peace-keeping mission in Lebanon?