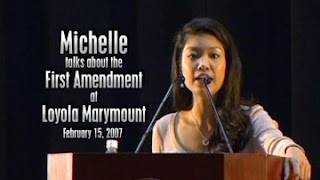 Don't know why this is but I have never managed to face a truly hostile audience. Every time I think this is going to happen, somebody quietly whispers that actually they are all on my side. Very disappointing. Of course, I have had to face hostile questioning by BBC and ITN reporters but that goes with the territory.

So I was fascinated by Michelle Malkin's incredible performance at Loyola Marymount University when she talked about the First Amendment, something that academic institutions in America seem to have lost sight of.

What I am talking about is the First Amendment to the United States Constitution and the first article of its Bill of Rights:

Congress shall make no law respecting an establishment of religion, or prohibiting the free exercise thereof; or abridging the freedom of speech, or of the press; or the right of the people peaceably to assemble, and to petition the Government for a redress of grievances.

Michelle's speech is in two parts, the first one highly entertaining. Watch her deal with the muppet who, as a writer on a student newspaper, could say that it was an "atrocity" that Michelle was so highly regarded and highly paid. (Though not, it would seem, as highly as certain others, such as Al Gore.)

In the second part of the lecture Michelle covers many of the subjects and countries we try to cover on this blog, though we do tend to leave American academic squabbling alone.

Her reiterated question of "who are the extremists" is one we often have to ask ourselves as well. Incidentally, I do have some extra sympathy with Michelle Malkin. It would appear that she is only 5ft 1 as well in height. And no, I don't look like she does.