Run out of town? 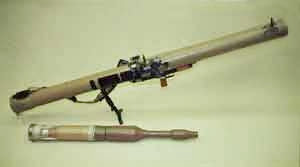 Even if he has missed the much bigger story, one must, at least, compliment the The Sunday Telegraph’s Sean Rayment on his "scoop" today, reporting on what appears to the first successful use by Iraq insurgents of the Russian-made RPG-29 anti-tank weapon (pictured) against a British Challenger 2 tank, in August last year.

The weapon breached the armour of the Challenger, deployed in al-Amarah, and blew off part of the foot of the driver, Trooper Sean Chance. It also injured two other crew, although not seriously, it appears.

Reyment, however, couches his story in terms of, "MoD kept failure of best tank quiet," and his story focuses on "failings with the tank's armour".

To that effect, he gives space to Trooper Chance's mother, telling the newspaper that her son had been told that the Challenger was the best in the world and essentially impenetrable to any weapons the insurgents possessed. She is cited as saying that: "Sean often told me he felt totally safe because he was in the best tank in the world. But we now know that is not the case. The government has covered it up." 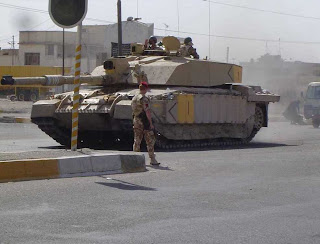 Indeed, the government may have been covering up, but on a much more serious issue than simply the damage to one tank.

The clue is in the timing. That time last year, the presence of the RPG-29 in theatre had long been rumoured. We ourselves reported on it in April last year, four months before this incident occurred, when we stated, "there is every possibility that it could also be used against British troops, who have no effective defence measures against the weapon."

And, in August 2006, there were a number of discussions on the internet about the weapon, not least here, while we were also pointing out that tanks were far from safe in counter-insurgency operations.

Rayment makes great play of the fact that the weapon may have penetrated the Challenger's explosive reactive armour (ERA) yet, as many technical sites will attest, that is precisely what the RPG-29 was designed to do. For instance, the effectiveness is demonstrated here, and here we read:

The RPG-29 grenade launcher has been adopted by Soviet army in 1989, and it is intended to defeat most modern tanks, fitted with ERA protection… The PG-29 HEAT grenade has a tandem warhead and a rocket booster with eight folding stabiliztator fins at the rear. With this design, the smaller front warhead is intended to set off the ERA (Explosive Reactive Armor) block from the safe range, and then second larger warhead strikes the hull of the tank…

However, from his very first paragraph, Rayment's first aim is to make a case that the MoD is misleading us, by referring to the more recent event when a Challenger was damaged by an IED. In this context, he writes:

The Ministry of Defence had claimed that an attack last month that breached a tank's armour was the first of its kind in four years of war in Iraq. But another Challenger 2 was pierced by a powerful rocket-propelled grenade.

But, that that IED attack was "the first of its kind" was indeed that case – the first time a Challenger had been breached by an IED, as opposed to an RPG. Furthermore, when the media finally woke up to the incident, that was, in the main, how it was reported. 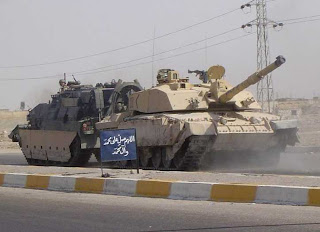 Only the The Daily Telegraph had it different, citing an MoD spokesman saying: "This was the first successful attack on a Challenger 2, it's the first bomb to have damaged it."

And there, in his narrow-minded pursuit of the well-worn theme of "equipment failures", Rayment misses the much bigger story - the much bigger failure. Here, we know that, when the attack occurred last August, al Amarah had acquired the reputation of the "badlands", and British troops were under constant, heavy attack.

It was also at the time of the height of the "Snatch" Land Rover controversy, and a number had been lost in al Amarah. In June of that year we had reported on an account of operations in la Amarah from the Regimental Journal of the King's Royal Hussars. Based on this account, we wrote:

From this emerges that the current tactics adopted – unwittingly – are brutal and primitive. Quite simply, the troops are told to patrol their areas in lightly armoured Land Rovers until one or more of them are blown up. Then the Land Rovers are withdrawn and replaced by Warriors and Challenger tanks, until it is deemed safe to resume patrolling in Land Rovers again. 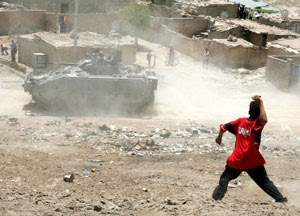 Thus, by earlier that year, there was a situation where it was only safe to patrol in Warriors and heavily armoured Challengers and then, in August, a Challenger gets hit by an RPG-29. Had news of that incident leaked out at the time, it is safe to assume that the media would have gone into a frenzy: not only were "lightly armoured Land Rovers" not safe, even our most powerful tanks were at risk.

Instead, the MoD kept quiet and, later that same month, in what seemed at the time, considerable haste, the British Army quit its base in al Amarah, leaving it to the mercy of the militias.

So, rather than the wholly unconvincing explanation to date (more here), was the appearance of the RPG-29 in al Amarah the real reason the British quit? Was the British Army so spooked by the appearance of this more powerful weapon - and was the MoD was fearful of the media reaction - that it cut and ran? Thus, did the insurgents run us out of town, simply by deploying an advanced anti-tank weapon?