I did what I thought was right 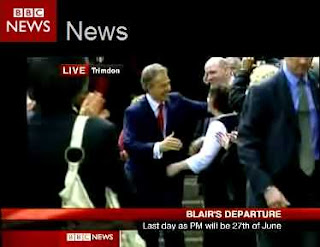 It was inevitable that, today, the news agenda would be dominated by Tony Blair's resignation announcement, the day of his departure now set for 27 June. But, showman to the last, standing in front of an adoring audience in Trimdon Labour Club, he declared, "I did what I thought was right".

Outside, in the sunshine, amid the media circus and the phalanxes of yellow-jacketed police, there was a voluble section that disagreed, blasting off air horns with monotonous regularity. Those were the anti-war demonstrators, protesting about what will, without doubt, be the single most important issue which defines the Blair legacy: Iraq.