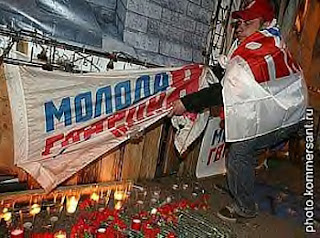 In yesterday’s Wall Street Journal Europe Mart Laar, the former Prime Minister of Estonia and a devoted free-marketeer, had an article entitled “Imperially Deluded”[subscription only]. In it he analyzes President Putin’s more or less imperial ambitions, his desire to reunite what was the Soviet Union or, at least, the Russian Empire and his turn away from the attempts made under Yeltsin to understand twentieth century history. All of this is very worrying for Europe and the world and, as Mr Laar rightly points out, for the Russian people. It is also fraught with problems for President Putin and his successor, whoever he may be.

The article also corrects the various accounts of Estonia’s liberation that are and have, for the last sixty odd years, been put about by the Russian authorities. (Incidentally, one does wonder yet again about those youngsters and their supposed rage. They look to me to be in their late teens and early twenties. Yet they are screaming about their grandfathers being called gangsters. Given how early people marry and bear children in Russia, I’d say they are talking about great-grandfathers at least, possibly great-great-grandfathers.)

This is what Mr Laar says:

All this agitation comes over a monument that not only was not destroyed but that most Estonians view as symbol of over four decades of Soviet occupation. On September 22, 1944, the Red Army “liberated” Tallinn not from German forces, who were nearly gone, but from a legitimate Estonian government. The Estonian flag, not the German swastika, was taken down from government buildings that day.

The swastika had been removed by Estonian soldiers, some of whom died in the fighting. The Soviets arrested the Estonian government, shot some of its members and sent others to the gulag. So the Estonians shared the fate of the leaders of the 1944 Warsaw Uprising, who were also hunted down and killed by the NKVD after putting up a valiant fight against the Nazis.

These are the facts that official Russian ignores, and most ordinary Russians are not even aware of. Members of Estonia’s 1944 government haven’t even been rehabilitated in post-Soviet Russia, whose Supreme Court still considers them “enemies of the state”, as the USSR branded them.

Official Soviet behaviour was similar in other liberated countries with a great deal of effort going into ensuring that local resistance to the Nazis was side-lined and exiled at best, murdered, judicially or otherwise, at worst. On the other hand one cannot blame the soldiers and officers involved. They were undoubtedly told that these were all fascists, Nazis and the enemy in general. What did they know? What do the journalists who have been foaming at the mouth in the last couple of days know?

Some Soviet soldiers realized what was going on and brought stories home. Quite a few of them found themselves transported to the gulag as well. A very large proportion of the victorious Red Army celebrated a number of Victory Day anniversaries behind barbed wire in Siberia.

So much for the history that is still unresolved and is causing so much anguish. What of the present and the future? It is true that until you know and understand the past you cannot move forward to the future. This seems to apply to Russia, a potentially great country but, apparently, doomed to go round and round in historical circles.

This time round, however, there is a new kid on the block – the European Union, who has insisted that the only relationship it could have with the former Communist countries is for them to become members. Estonia is, thus, a member state as is Latvia, which was being bullied, though not so spectacularly, last year.

Russia, as the Estonian government has pointed out, is interfering in Estonian affairs, inciting riots in the country, attacking Estonian diplomats in Moscow. Should the EU not make a stand?

We have already documented the mewling response the European Union has produced. It has sent a delegation to Moscow. Nor has it exactly been active in lifting the blockade on the Estonian embassy that has finally gone, according to Kommersant.

It seems that members of Molodaya Gvardiya and Nashi, both pro-Kremlin organizations, controlled and supported by the Kremlin, have lifted their siege, much to the local militia’s relief. One can imagine that the militiamen were itching to deal with that lot the way they usually deal with demonstrators but were restrained by the knowledge that this spontaneous action was entirely favoured by the authorities.

It seems that the Estonian ambassador’s scheduled holiday was used as an excuse to call back the hooligans, who departed, enormously pleased with themselves and shouting nasty and stupid abuse at Estonia, the Estonian ambassador and the Estonian people in general. At some point, Putin will have to deal with these youthful cadres, who may well get out of hand. That will not be pretty.

Meanwhile, some businesses have decided to boycott Estonian economically.

Although the Russian authorities did not proclaim any economic sanctions against Estonia, regional businessmen and some companies took it upon themselves. Thus, Severstaltrans holding suspended the construction of a car-assembling factory in Estonia, which was to assemble up to 120,000 off-road cars annually (the investments into this project reach about $80 million). Akron chemical holding decided to suspend the funding of investment projects in Estonia. Bashkiria’s chain Universal-Trading stopped selling Estonian goods in its stores. Owner of Kalev confectionary Oliver Kruuda said on Thursday that “the Russian market is closed for Kalev”. According to Estonia's Aripaev, Kalev’s sales in Russia made up €260,000 monthly.

It seems unlikely that these businesses merely decided to cut off their noses to spite their faces. One is justified in suspecting a certain amount of government pressure behind the scenes.

On the whole, Russia prefers to deal with individual member states, knowing full well that some of the older ones like France and Germany will probably find ways of accommodating it. Unfortunately, this crisis has been too big and too public. The EU had to step in as has NATO, possibly, once again seeing that the EU will do precious little.

The EU is now threatening to withdraw its support, bought by Russia reluctantly signing up to Kyoto, for that country’s membership of the WTO unless it stops trading sanctions on Estonia, resumes the supply of oil and stops hassling her diplomats. As the United States was never that keen on Russia joining, it seems quite likely that this will be put on the back burner again.

Meanwhile the Finnish President, Tarya Halonen, has expressed what must be the thought in many an EU politician’s head: above all we must have joint line, no matter what that might be. The crisis with Estonia will not affect the EU-Russia Summit that is due on May 18 and only Germany, the President, can deal with the matter. The Estonians must be a little surprised by the Finns running scared but this may not be the general opinion in that country. Politicians, as we know, do not always express the general opinion in their country.

Both the EU and NATO have, apparently, offered support and solidarity to Estonia though their main concern is to defuse the tension with Chancellor Merkel particularly active in trying to ensure that the coming Summit is not derailed. So far, no member state has asked for a postponement but if the situation is not resolved this may well happen.

In any case, what can be achieved at the Summit? It is quite clear that Russia is determined to show her supposed stature as a great power by bullying anyone who appears to be a possible victim. Once these victims stand up to the bully, there is a retrenchment.

The EU has boasted mightily of its soft power and ability to influence other countries through it, unlike the nasty Yanks who always use force. Actually, even the second half of that is not true. Well, here is Russia, on the EU’s doorstep, that could do with a bit of influencing and soft power. All the EU seems to be doing is limp-wristed flapping and running up Angela Merkel’s phone bill and all because that famed common foreign policy has no real aim or purpose. All it ever wants to achieve is peace and quiet and everybody getting along. If that means giving in to bullying, well, so be it.