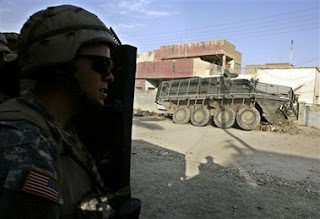 "We grumpy people, perpetually outraged by the stupidity and deceit of our rotten rulers have (whisper it gently) had rather a good 60 years."

So writes the "brilliant" Andrew Marr in an extract from his book, given a prominent puff in The Daily Telegraph today, one sentence in a wodge of otherwise unreadable prose under the heading, "The myth of our decline".

From this we are, one presumes, supposed to deduce that, not only can things only get better, but that they have got better. For this we must be eternally grateful, although not, as Marr will aver, to our leaders.

Actually, there is no doubt that things have got better in some respects, not least in our standard of living and creature comforts, but it is the human condition to take all that for granted. Instead, we focus on our discontents and, invariably, harp back to some golden age when things were so much better.

In that, the preoccupation (one, at least) of this blog is the deterioration of the media, its descent into venality, its concentration on the trivia and its neglect of a vast swathe of issues which we consider important.

Nevertheless, it was almost certainly ever thus. When researching newspaper coverage of the sixties and seventies, for instance, one was struck by how little reporting there was of the events which led to the emergence of what is now the European Union. And, fascinated as I was by the US struggle in Vietnam during the same period, I recall to this day being frustrated not by how much but by how little sensible, routine coverage of events there really was.

A golden age, therefore, there never was and, in terms of the availability of information, if the past is to be measured against the present, it is in the here and now that we have never had it so good. Not only do we have 24-hour news channels and all the main newspapers online, we have access to the agency reports (on which most of the media rely) and a vast range of current and archival material, all available at the click of a mouse (or touchpad, if you prefer)

However, there is one issue where the deterioration is real, and measurable – not just some figment of the imagination – and that is in defence. More specifically, defence procurement, the purchase of the machines of war on which, in times of armed conflict, we rely for our very survival.

In coming to this conclusion, we can actually turn to evidence, unclouded by rose-coloured spectacles, not least from a remarkable academic in Manchester's UMIST university, a man who has made his speciality the study of the history of technology. In his book, Warfare State: Britain, 1920-1970 and an online essay (145 pages) England and the Aeroplane, which addresses some of the same themes, he recounts how procurement decisions for some key weapon systems, both before and in the decades immediately after the Second World War, were a central part of the mainstream political debate.

Certainly, this is not the case now. From what Edgerton calls a "Warfare State", we have now shrivelled into an inwards-looking welfare state, unconcerned with those issues on which our longer-term survival may well depend.

In this context, the capabilities of our Armed Forces rest entirely on the equipment they are given and, in turn, foreign policy and many other options that we can exercise, depend on those capabilities. Therefore, defence procurement, as our forebears were well aware, is no dry, academic subject, but a vibrant, massively important issue which will shape our futures – and one which we neglect at our peril.

That is why we have followed so closely the serpentine twists and turns of the biggest ever Army procurement project in living memory, the Future Rapid Effects System (FRES), about which recently we have posted two pieces. The importance of this project cannot be over-emphasised. Not only is it hugely expensive, having increased over a mere two years from £6 to now £16 billion, but it will shape the bulk of our future Army and, thereby, define its capabilities.

Those with longer memories, however, will recall a piece we posted in May last year when it was being mooted that one of three existing platforms might be suitable as the basis of the FRES vehicles. 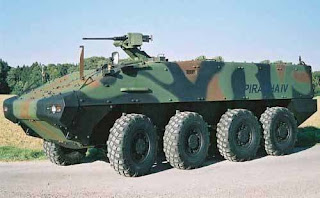 Although it has since been decided that there is no suitable off-the-shelf platform, the existing vehicles lacking development potential, there is every indication that the basic design parameters for our vehicles will not be dissimilar. This is of very great significance as one of those existing platforms is the Piranha, on which is based the US Stryker armoured personnel carrier, itself being used as a model for the future warfare for which FRES is intended. 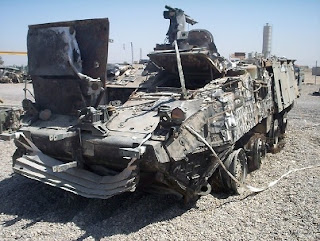 About the Stryker, though, there has been recent and disturbing news which might give the FRES planners cause for considerable thought. As reported a AP, a string of heavy losses from powerful roadside bombs has raised new questions about the vulnerability of this vehicle.

We are told that, since the Strykers went into action in violent Diyala province north of Baghdad two months ago, losses of the vehicles have been rising steadily. A single infantry company in Diyala lost five Strykers this month, in less than a week. In one of the biggest hits, six American soldiers and a journalist were killed when a huge bomb exploded beneath their Stryker on 6 May. It was the biggest one-day loss for the battalion in more than two years.

The Stryker's vulnerabilities, says AP, have become increasingly apparent since a battalion of about 700 soldiers and nearly 100 Stryker vehicles from the Army's 2nd Infantry Division was sent to Diyala province in March to bolster an infantry brigade struggling to restore order there.

Trouble started as soon as the Strykers arrived in Baqouba, the provincial capital of Diyala. US commanders ordered the vehicles into Baqouba's streets at dawn the day after they arrived. The hope was that the large, menacing vehicles would intimidate insurgents and reassure local residents. 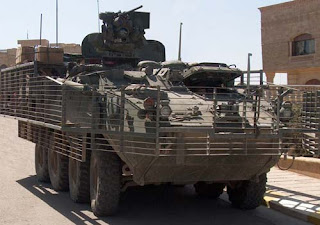 Instead, insurgents hammered the Strykers with automatic weapons fire, rocket-propelled grenades and a network of roadside bombs. By the end of that first day, one American soldier was dead, 12 were wounded and two Strykers had been destroyed.

Losses have since mounted. A few days before the attack that killed the six soldiers and a Russian journalist, troops scrambled out of another damaged Stryker and took cover in a house while they watched the vehicle burn. Several of them were injured but none seriously.

Lt. Col. Bruce Antonio, who commands a Stryker battalion in Diyala, says some insurgents had found "the right mix of explosives and IED positioning to inflict severe damage on the vehicle." He also noted that tanks had proved vulnerable.

The insurgents also apparently are becoming better at hiding the devices — the IED that killed the six soldiers and the journalist was believed hidden in a sewer. To add potency, insurgents surrounded the device with cement to channel the blast force up into the vehicle.

Now, returning to the politics of this issue, the exact the point we were raising in our most recent piece was whether the type of (very expensive) equipment we are considering - as represented by the Stryker - is at all suitable for counter-insurgency operations.

Before going any further with the FRES project, therefore, there should be a very frank and open discussion about what sort of operations we intend the Army to handle in the foreseeable future. If the focus (and the main thrust) of operations is to be counter-insurgency, then the equipment we need to buy will be very different from that which will we need for conventional, high intensity warfighting and that which seems to be under consideration for the FRES project.

Unless we are going to decide that we will be fully equipped for both roles – which will require a considerable increase in defence spending – we must start making very serious and important choices.

This is where, of course, we do need media engagement and where, in this very specific instance, things have not got better, and show no signs of so doing.