Leave it to the experts? 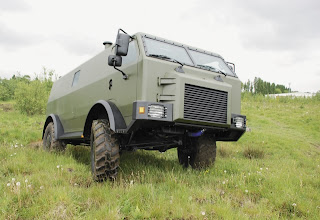 It was on 30 April when we reported that the MoD had expressed an interest in ordering a further 180 of what it termed the "Medium Protected Patrol Vehicle" (MPPV) – the specification very similar to that of the Force Protection Cougar, deployed by the US in Iraq and Afghanistan, and on which is based the British Mastiff.

Although the favourite seems to be the Cougar, with a contract value of between £20-100 million, however – and the prospect of repeat sales - it was only a matter of time before other military builders started sniffing around in the hope of securing the order.

One such, according to Jane's (subscription only) is the British specialist vehicle contractor MacNeillie, which has rolled out the prototype of its new Military Armoured Carrier System (MACS). The company has confirmed that it will enter this vehicle for the British Army requirement for the MPPV (pictured).

The vehicle is based on the German Mercedes-Benz Unimog 4 x 4 cross-country chassis (as is the German Dingo II) and, although the company is new to military vehicles, it claims considerable experience in protecting vehicles, having developed the armoured body for 60 Pinzgauer 6x6 protected vehicles supplied to the Royal New Zealand Army several years ago. 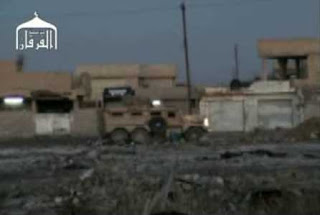 Looking at the photograph (above left) provided by the company, however, it is immediately apparent how vulnerable the vehicle would be to mines and IEDs. To protect against these, however, the company offers additional V-shaped armour panels to fit under the belly.

What the company does not seem to appreciate, though, is the nature and severity of the challenge confronting vehicles in Iraq, shown by this extraordinary sequence of video-grabs from a training film made by Iraqi insurgents, designed to familiarise their fighters with the US fleet (see 4.34 minutes into the film). 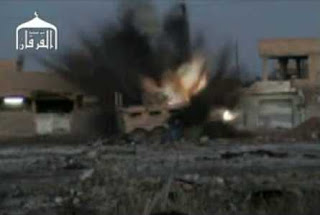 The sequence shows a 6x6 Cougar driving along a street in an unnamed location, whence what is clearly a huge bomb is detonated alongside it, lifting the front of this 22 ton vehicle clear of the ground. The "grabs" cannot do justice to the shock of such a huge explosion, which completely envelopes the vehicle in flame, the brightness of which momentarily blanks out the video. 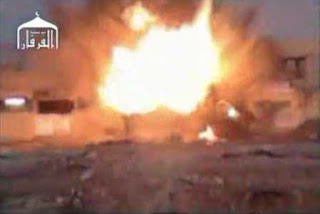 However, as the flame subsides, we see the Cougar emerge, seemingly intact – at which point the film is cut and sequence repeated. The impression the insurgents wish to convey is that their bomb has destroyed the vehicle, but we are not allowed to see the aftermath. This is a typical insurgent ploy, the same film showing several protected vehicles hit by bombs, with the films being cut just after the detonation. 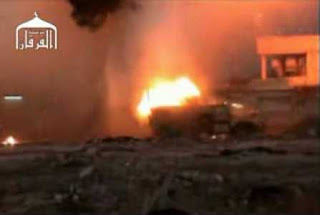 On the basis of the most recent information from the manufacturers, though, none of the crew were killed. The company claims that, with their vehicles collectively having served over 100,000 days in Iraq and Afghanistan – taking over 2,000 IED hits - no-one has been killed in a Cougar. So far, only three soldiers have died in a Force Protection vehicle. This was in a Buffalo, last December, after a strike from an explosively formed projectile.

This does rather justify the Army's decision to add side armour to the Mastiff (about which we were more than a little sniffy). But it should also make purchase of the MacNeillie vehicle wholly unacceptable, as indeed should have been the purchase of the highly vulnerable Pinzgauer Vector.

The ultimate irony about this whole business though, is that, as readers will recall, when it comes to the Cougar, the British were there first, have purchased in 2001, eight "Tempest" Mine Protected Vehicles, on which the Cougar design was based.

We are reminded of this by the discovery of an article in Stars and Stripes, dated 1 September 2004, announcing the order of new vehicles to protect US Marines. This was the first order of the Cougar. 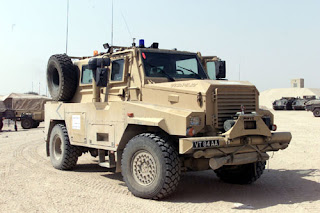 But what compounds the irony is the photograph accompanying the article (shown right), to illustrate the type of vehicle being bought. But this is not a Cougar, and nor is it American. It is, in fact, a Tempest, in British Army colours, based in Iraq. But, although available from 2003 onwards, the vehicles were never used for the purposes to which the Americans subsequently put them, with such great success, and they were eventually returned to the UK (where one was seen in 2005), from where some have been redeployed to Afghanistan.

When it comes to force protection, therefore, it seems a tad unwise to leave every aspect of the safety of our troops to such outfits as MacNeillie and Pinzgauer, or even the MoD – a timely reminder that the "experts" do not always get it right.