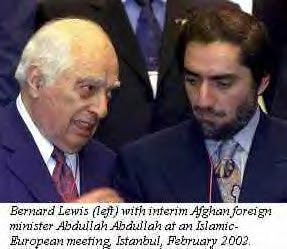 When Bernard Lewis writes about Islam and jihad it is always worth reading. I know of some knowledgeable people who disagree with him but nobody except complete moonbats dismisses him.

His latest piece in the Wall Street Journal traces some historical developments in the twentieth century, in the process putting to sleep the myth of the eternal Muslim (or even Arab) solidarity. Well, we know this to be untrue from the many wars, killings and outright massacres that are perpetrated by Muslims on Muslims. Most of the insurrectionist terrorists' victims in Iraq are other Iraqis, often civilians that include women and children.

The ongoing fighting in Gaza will soon make people there wish the Israelis had never left. The bombs in holiday resorts in Egypt and Bali (among others) not only killed the Muslims who live and work there but threatened to deprive the others of their livelihood. And so on, and so on.

During the Cold War, two things came to be known and generally recognized in the Middle East concerning the two rival superpowers. If you did anything to annoy the Russians, punishment would be swift and dire. If you said or did anything against the Americans, not only would there be no punishment; there might even be some possibility of reward, as the usual anxious procession of diplomats and politicians, journalists and scholars and miscellaneous others came with their usual pleading inquiries: "What have we done to offend you? What can we do to put it right?"

He gives an interesting example:

During the troubles in Lebanon in the 1970s and '80s, there were many attacks on American installations and individuals--notably the attack on the Marine barracks in Beirut in 1983, followed by a prompt withdrawal, and a whole series of kidnappings of Americans, both official and private, as well as of Europeans. There was only one attack on Soviet citizens, when one diplomat was killed and several others kidnapped. The Soviet response through their local agents was swift, and directed against the family of the leader of the kidnappers. The kidnapped Russians were promptly released, and after that there were no attacks on Soviet citizens or installations throughout the period of the Lebanese troubles.

So the Muslim governments remained loyal to the Soviet Union, ignoring the oppression and anti-religious activity in the Muslim Republics of that country and refusing to criticize the mighty (and vicious) Communist state even when it invaded Afghanistan.

After weeks of debate, the U.N. General Assembly finally was persuaded to pass a resolution "strongly deploring the recent armed intervention in Afghanistan." The words "condemn" and "aggression" were not used, and the source of the "intervention" was not named. Even this anodyne resolution was too much for some of the Arab states. South Yemen voted no; Algeria and Syria abstained; Libya was absent; the nonvoting PLO observer to the Assembly even made a speech defending the Soviets.

One might have expected that the recently established Organization of the Islamic Conference would take a tougher line. It did not. After a month of negotiation and manipulation, the organization finally held a meeting in Pakistan to discuss the Afghan question. Two of the Arab states, South Yemen and Syria, boycotted the meeting. The representative of the PLO, a full member of this organization, was present, but abstained from voting on a resolution critical of the Soviet action; the Libyan delegate went further, and used this occasion to denounce the U.S.

Of course, events did not go quite the way they were predicted. Many Muslims did turn against the Soviets, asking for American help in the process a perfectly sensible thing to do. They also, and Osama bin Laden is an excellent example, turned against the Arab leaders who had refused to help their brethren.

Here is where it all gets a little difficult. As Professor Lewis points out, we may assume that the Soviet empire collapsed under an onslaught from the West (well, some of the West) but to the likes of Osama bin Laden history says something else. One of the great non-Islamic superpowers collapsed because of the jihad against it. It was now time to deal with the other one.

Immediate reactions from the United States to attacks "on the World Trade Center in New York and on U.S. troops in Mogadishu in 1993, on the U.S. military office in Riyadh in 1995, on the American embassies in Kenya and Tanzania in 1998, on the USS Cole in Yemen in 2000" evoked angry words an no action. Here Professor Lewis lays to rest, yet again, another favoured myth of the left and the anti-American right: that nothing would have gone wrong if the coalition troops had not gone into Iraq.

What changed the equation again was unexpected American reaction to 9/11, which has ensured that there have been no more attacks on American soil. Is the situation changing again, what with the Speaker of the House kow-towing to the Syrian dictator, Baby Assad, and congressional demands for unconditional withdrawal of American troops?

These debates and similar pronouncements in the British media and the British parliament will hearten the jihadists. Then again, if the debates lead to a strengthened resolve, they may yet get a very nasty shock. One can but hope.