They don't even fade away 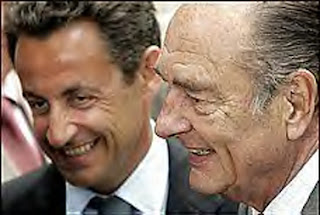 So farewell then Jacques Chirac? Apparently, not. Or even non. The man is not going away according to the Times and Expatica, among others.

Having bid a fond farewell to the people of France and exhorted them to behave themselves for the babysitter to retain their unity under the new president, l’escroc has departed from the imperial splendours of the Elysée Palace. He and his wife (incidentally, what happened to the daughter who had run his campaign and was credited with re-grooming him?) are moving into a private apartment for the first time since 1977 when Chirac became Mayor of Paris.

There is something odd about this apartment. It had been lent to them by Rafik Hariri the former Prime Minister of Lebanon, who was assassinated, presumably on Syria’s orders, the whole case being a superb example of French influence in the Middle East. Even though Mr Hariri is not around, M and Mme Chirac have the flat rent-free.

As it happens, the question of accommodation may well rise to haunt the now ex-President, as Charles Bremner delicately puts it:

Those mayoral years may return to haunt Citizen Chirac after June 16 when his presidential immunity lapses.

Investigators want to tie up loose ends in cases arising from illegal funding of his Gaullist Rassemblement pour la République (RPR) party when he was its chief. More than a dozen of his subordinates have received suspended sentences.

Sarkozy is denying that a deal might have been done to extend Chirac's immunity.

Still, l’escroc does not intend to remain idle. Like so many other past leaders he is setting up a Foundation, himself for the use of, in order “to help to shape global policy on development and climate change”.

Mr Chirac, who is succeeded tomorrow by Nicolas Sarkozy, wants to use his five decades of political experience, his passion for nonEuropean civilisations and his more recent conversion to the environment, said Michel Camdessus, 74, the new foundation’s president. “Jacques Chirac has deep convictions,” he told Le Monde. “A locomotive like Chirac will get things moving.”

Quite so. We have already seen how successful his convictions and, indeed, his policies have been, particularly in Africa and the Middle East, not to mention in Europe where he managed to antagonize most countries and his obsessive struggle against the United States.

Here is an interesting reminder from something called the Assyrian News Agency. It seems that the New York Times is already weeping tears over Chirac’s departure (well, the new French President seems to be more pro-Ameerican than many a Democrat).

He will be remembered as the first French leader to recognize the country's crimes against Jews in World War II and to commemorate formally the complicity in African slavery."

Whereas Sarkozy, according to the article, refuses to apologize for anything. Maybe, as the son of a Hungarian immigrant and the grandson of a Bulgarian Jewish one, he does not think it appropriate. In any case, apologies for misdemeanours of the long-gone past is extremely easy.

Apologizing for the past, however, does not mean knowing how to apply its hard learned lessons to present circumstances. In this respect Chirac was a dismal failure. He kowtowed to the Hitler wannabes of our time such as Saddam Hussein. Indeed, Chirac ran interference for Saddam at the United Nations at every turn.

The two men's friendship went way back to the 1970's, when Chirac (who was then French Prime Minister) had helped arrange France's assistance in building a nuclear reactor in Iraq. Chirac, who vehemently condemned Israel for destroying the reactor in 1981, was so cozy with the Iraq dictatorship that his unofficial media title at the time was "Sheikh Iraq."

Indeed, France under Chirac's leadership continued to provide assistance to Iraq during the period of economic sanctions imposed by the United Nations Security Council. By 2001, France had become Iraq's largest European trading partner and had controlled over 22.5% of Iraq's imports, which included arms imports.

A report commissioned by the French parliament published in September 2002 put the value of French exports to Iraq since sanctions were imposed at $3.5 billion. Just prior to the start of the Iraq war in 2003, France's huge oil company and a large contributor to Chirac's political party -- Total Fina Elf -- was poised to win contracts to drill large unexploited oil reserves in Iraq which would have been jeopardized by Saddam's overthrow.

Chirac did not act out of any moral conviction in opposing the United States at the Security Council when we sought a follow-up resolution authorizing military action to enforce all of the Security Council's prior resolutions ignored by Saddam. Chirac put the narrow business interests of his own political benefactors before any concern about the potential dangers posed by Saddam Hussein's regime to international peace and security.

Plenty more of the same. In fact, it is fair to argue that President Chirac's behaviour reassured Saddam that he was immune from attack and virtually made any alternative solution to the crisis impossible.

Nor must we forget M Chirac's other best friend, President Putin, who must have approved of l'escroc's attempt to bully those pesky East Europeans.

Exciting times ahead for the Jacques Chirac Foundation, which is to be financed from corporate and private donations.