They are victims again 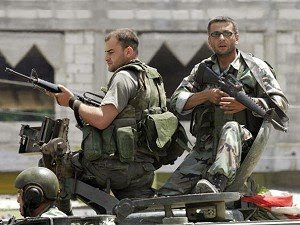 As the situation in the Nahr al-Bared camp deteriorates, humanitarian organizations continue to flap around on the edges, hoping that at some point the cease-fire will last long enough for them to get in there and distribute supplies to the remaining inmates (there can be no other word) who have no running water or electricity.

Secretary of State Condoleezza Rice has lambasted the Islamist extremists and expressed her support for the Lebanese government.

I certainly hope that the Lebanese government will be able to deal with these extremists. It's just another example of extremists in the Middle East who are trying to destabilize democratic governments.

Then again, there are not all that many democratic governments in the Middle East to destabilize and the one undisputed democracy – Israel – never seems to have the world or, even, Secretary Rice speaking out in its favour.

Inevitably, there are the voices that think the Lebanese army responding to Islamist extremism in those everlasting refugee camps in the north of Lebanon and the consequent inevitably problems are all, but all, Israel’s fault.

This outbreak of violence, the worst in Lebanon since the 1975-1990 civil war, is yet another consequence of the world's - and specifically America's -- failure to settle the Arab-Israeli conflict and resolve its tragic corollary, the Palestine refugee problem.

In Lebanon alone, 12 anarchic camps are home to some 400,000 refugees, most scratching a living well below the poverty line. They are a permanent source of instability. Misery and despair are the crucial ingredients of violence and terrorism.

Two or three hundred well-armed fighters of Fatah al-Islam are still holed up in the Nahr al-Bared camp near Tripoli. The Lebanese Army cannot go in to flush them out because of the virtual extra-territorial status Palestinian camps in Lebanon have enjoyed since the late 1960s.

One wonders if these people ever read what they have written. How exactly would the situation as described in that paragraph be settled by the world and, specifically, America? What would the Palestinians who, uniquely, have been living in refugee camps for generations without the slightest possibility of getting out of them and leading normal lives (unlike all other refugees in the world) achieve through any settlement engineered by other people?

We all know the answer to the second question. What they will achieve is a prolongation of their victim status.

To be fair to Dar Al-Hayat, the rest of the article is an analysis of what is going on in Lebanon and of the choices that the Lebanese government and army face. Since it persists of talking about the “Sunni street”, questions are being begged.

There seems to be some agreement that Fatah al-Islam, the group that is ensconced in Nahr al-Bared and, possibly, in other refugee camps is not Palestinian in origin. Possibly it is linked with Al-Qaeda, possibly it is another terrorist group that started up in Saudi Arabia or some other estimable Middle Eastern state.

If one thinks logically about this then one realizes that refugee camps of the Nahr al-Bared kind are obvious targets – full of people who are eternal victims, think the world owes them a living and will follow anyone who tells them that this is so and they can achieve something or other through killing people. They are also geographically easy. You can get a lot of possible supporters or, at least, victims who cannot complain too much (are these not brother Arabs, after all?) in one place.

So, one must ask who is it that has kept the Palestinians in their camps, making them easy targets? One of the most obvious organizations is the U.N. Relief and Works Agency (UNRWA), a most peculiar organization in that it exists in order to deal with only one group – the Palestinians in the Middle East. Furthermore, its way of dealing with them is to keep them in refugee camps, thus providing the world with endless pictures of victims (and themselves with jobs, one assumes).

According to an article in the Washington Times, UNRWA has been aware for some months that heavily armed “foreigners” were moving into Nahr al-Bared. The officials, all, one assumes, on comfortable salaries and even more comfortable expenses, could do nothing about this, as the camps are self-policed. That, as we know, is part of the problem. The Lebanese authorities cannot move into the camps to sort matters out until it gets to the situation we have at the moment.

On the other hand, UNRWA could have raised the alarm. Its officials are not exactly backward about coming forward normally. Why were there no statements, complaints or interviews about “a large band of foreigners carrying what has been described as mortars, rockets, explosive belts and other heavy weapons” entering the camp that they were supposed to be overseeing?

There are other questions, some of them being asked helplessly by Karen Koning AbuZayd, commissioner-general of UNRWA. For instance, why did the Palestinians, who are policing the camp, not stop this invasion? Come to think of it why did they not leave before the violence started? Mind you, the answer to that might be that what with the Lebanese army outside and Fatah al-Islam inside they were not allowed to leave. After all, UNRWA is not usually enthusiastic about Palestinians abandoning their refugee camps unless it is to go to another one, which is what many of them are doing in northern Lebanon at the moment.

Some of the refugees are going to Tripoli but it is questionable how long they would be allowed to stay there and some are crowding into the Badawi refugee camp, also, presumably overseen by UNRWA and its rather helpless commissioner-general. How long before the same sequence of events repeats itself in Badawi and any other Palestinian refugee camp one cares to name?

Let us not forget ever that UNRWA like all tranzis exists only because taxpayers’ money, all from the despised western world, is poured into it.