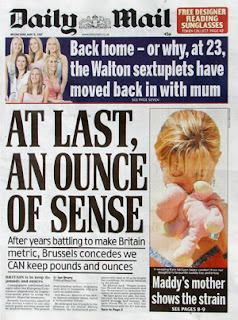 This is one of those times when the shallowness of the media actually works for you. With them announcing a metric victory and the Daily Mail parading its headline and claiming that "Brussels concedes we CAN keep pounds and ounces", anyone would indeed think a great victory had been won.

All that has actually happened, however, is that EU's industry commissioner Gunther Verheugen has told an EU parliamentary committee that he is in favour of extending the current derogation to Directive 80/181/EC, to allow the indefinite use of "supplementary indications" on packaging.

These "indications" are the additional information which can show the Imperial measurements relating to the product sold, which can be used as long as they are not as prominent as the statutory metric markings.

Originally, as part of the EU's drive towards a fully metric system of measurements (or, at least, its version of metric), the supplementary indications were to be removed in 1989, but – largely owing to the public outcry in the UK and the political sensitivity of the issue – the prohibition has been delayed twice, most recently by Directive 99/103/EC, which set the final date for removing the indications as 31 December 2009.

What Verheugen has done, therefore, is intimate that he has changed his mind from a position, expressed at late as 23 January 2007, where the Commission was opposed to change and had not tabled any proposals for an extension of the timescale.

For the moment, however, nothing has changed. Directive 80/181/EC as amended is still in force and, as far as the British government is concerned, the prohibition goes ahead on schedule, unless the EU law is changed. It is, therefore, up to the commission to introduce another amending directive, which must then be passed by the Council of Ministers.

As always, though, there is more to this than meets the eye. Although likely, the successful passage of an amending directive is by no means assured so what Neil Herron and his fellow campaigners have done is talk up the "victory", which will now make it very difficult for the commission to backtrack, and almost impossible for member states to oppose a new amendment.

This is an astute move by Herron, and also by the British Weights and Measures Association. It makes success more likely in this tiny corner of the battle against the encroachment of EU law into every nook and cranny of our lives. But, when it comes to it, this is only about supplementary indications. The march of metric goes on and the battle has only just begun.