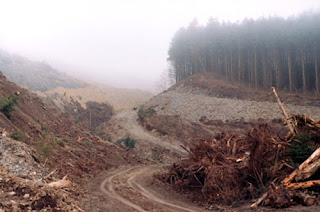 Operators of Britain's proposed new nuclear power plants will be required to make regular payments into a fund that will meet future waste-treatment and decommissioning costs, or so The Sunday Times tells us.

The paper adds that detailed plans for the fund are being drawn up by the Department of Trade and Industry and its advisers, and are expected to be concluded before the end of the year.

In the interests of fairness, however, will the owners of wind factories also be required to set up a decommissioning fund for when the bubble bursts and people realise that these monstrous machines are a total waste of space?

After all, there are the costs of removing the huge turbines, of excavating the massive concrete foundations and making good, of removing the access roads (example pictured) and the surplus power transmission lines.

Of course the foundations could be left in place, for some future archaeologist to puzzle over, possibly postulating that they are the remnants of shrines built by some weird religious cult – this being the only explanation for their random and inexplicable distribution.

He won't be far wrong.