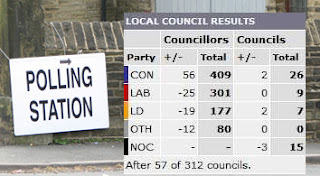 There are only so many things a mere mortal can tolerate, and listening to politicians droning on, spinning their elections results, is not one of them. With only 57 of 312 English councils declared, therefore, the limit of tolerance has been reached.

The Tories had gained 56 seats, Labour had lost 25, the Lib-Dems 19 and the "Others" losing 12. The view seems to be that the Tories had done well but not as well as expected – although some are predicting gains of up to 600 seats, with some advance in the North. For Labour it had not quite been the meltdown predicted and the LiB-Dems were being shredded between the two main players.

The losses of the "Others" represent mainly independent seats and there are not enough results in to judge the performance of the minnows. In Scotland, Labour is neck and neck with the SNP on the parliament vote, with a huge number of rejected ballots (over 100,000) owing to confusion over the dual voting system. In Wales, Labour just scrapes in as the largest single party.