Not quite Bolton or Rumsfeld 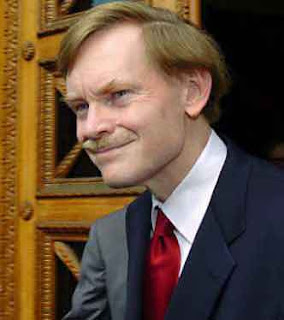 President Bush has nominated Robert Zoellick, the former U.S. trade representative and an executive at Goldman Sachs Group Inc. and the Treasury Department's original candidate, to become President of the World Bank once Wolfowitz retires.

Zoellick is somewhat smoother than Wolfowitz or Bolton and he has always worked on the trade side rather than policies that might upset people who prefer to admire dictators and lambast the United States. So the board might be reasonably happy to agree to his appointment, having lost the battle to hand the position to a European.

As Bloomberg puts it:

Zoellick will take over an agency racked by conflicts over Wolfowitz's role as an architect of the Iraq war, his recruitment of staffers from the Bush administration and a campaign to battle corruption. The bank also faces questions over its role as a lender to middle income nations that can raise money in capital markets.

It is, of course, the last two that are really problematic and the first two were raised in order to prevent Wolfowitz from even attempting to deal with them. Robert Zoellick will need all the strength of character and acumen he can muster.