We're all doomed (not) 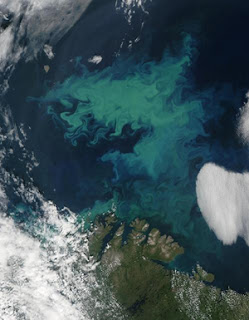 The oceans are losing the capacity to soak up rising man-made carbon emissions, which is increasing the rate of global warming by up to 30 percent, scientists said yesterday.

That is what The Times is telling us: Researchers have found that the Southern Ocean is absorbing an ever-decreasing proportion of carbon dioxide in the atmosphere. The excess carbon, which cannot be absorbed by the oceans, will remain in the atmosphere and accelerate global warming, they said.

As always, though, you have to read right to the end, before you see that: "The researchers accepted there were limits to the data available from the Southern Ocean", and: "the magnitude of the CO2 sink is heavily disputed."

Then, it was only two weeks ago that the self-same Times was telling us that the first commercial venture into growing vast plankton blooms big enough to suck carbon from the atmosphere was starting this month. The story went thus:

Tons of powdered iron will be poured into the Pacific to induce the growth of blooms big enough to be seen from space. The scheme's backers believe that the iron seeding technique could radically reduce the carbon in the atmosphere and will open up a multimillion-pound carbon-offsetting industry. Simultaneously, they hope to reverse the decline in plankton levels, which are estimated to have fallen by at least 9 per cent in the past two decades.

Iron seeding is thought to work because it provides a crucial nutrient for plankton growth that is missing or in short supply in up to 70 percent of the world's oceans. As the phytoplankton multiplies it will absorb large quantities of carbon and, if the trials are a success, much of it will sink to the seabed when the microscopic plants die and sink.

So there we have it. We are doomed because the southern ocean is not absorbing enough CO2 – and we are saved because the oceans are going to be used to absorb all the excess CO2.

You pays your money and you takes your choice.