A period of suspension 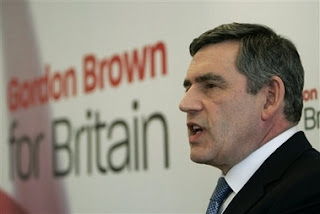 So Gordon Brown has announcement of his candidacy for the leadership of the Labour Party – to everyone's great surprise (not). A pretend challenger is readying himself in the wings, there to make a contest of an election which is a foregone conclusion, all to pre-empt accusations of a "coronation".

And that is the start of seven weeks of unmitigated tedium.

For the rest of us, outside the bubble and the self-regarding love-ins of the political tribes, this will be a period where hibernation would be a preferred option, were it possible: the broadcast news will be even more intolerable than it already is and the dead trees churned out by the print media will take an even faster trip to the recycling bin, most of their contents unread. Even euthanasia might be preferable – homicide more so.

Out the other side of this vapid ritual, we can expect the victorious Gordon Brown to reshuffle his people to produce a cabinet, followed by the Boy, who will also move his people around, precipitating another round of media hyperventilation. Then the lads and lasses whom we pay so much to represent us, will indulge in a few ritual rounds of sparring in what is laughingly called a Parliament, and toddle off for their well-earned hols.

Serious political comment, in the interim, will be suspended (not that there was much of it around anyway). Welcome to the new (not-quite) post-Blair world. Things, as they say, can only get better.