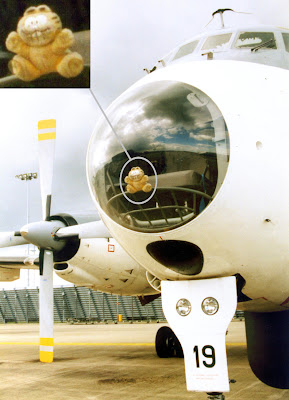 The aircraft is a Breguet Atlantique – the only maritime patrol aircraft to be specifically designed for the function. French-built, this one is operated by the German Kriegsmarine. The "observer" is Garfield, the cartoon cat, promoted to his responsible position when the aircraft dropped in to RAF Waddington for a visit.

And anyone who thinks the Germans have no sense of humour is sorely mistaken. I spoke to the navigator of the aircraft, an engaging young man, who gravely assured me that Garfield was a bone fide member of the crew and, in fact, had far more brains than the Captain.