Fun and games in Ukraine 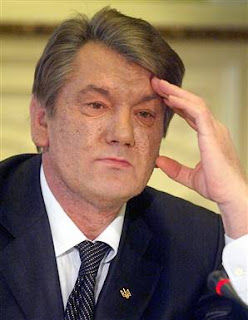 The row between President Yushchenko (pictured) and Prime Minister Yanukovich in Ukraine is going on relentlessly with the people of Ukraine occasionally taking part in it.

The election called by President Yushchenko on dissolving the parliament in April and theoretically agreed to by Prime Minister Yanukovich, have now been put back to June 24 after protests by thousands from both sides of the political divide.

President Yushchenko has sacked the Prosecutor General, Svyatoslav Piskun, according to him because Mr Piskun refused to resign from his parliamentary seat as he was supposed to and according to Mr Piskun because he refused to take action against three Constitutional Court judges.

Then, Interior Minister Vasyl Tsushko, ordered the troops of the Interior Minsitry to seize control of the sacked Mr Piskun's office, an act that President Yushchenko has condemned as illegal. To prevent further illegality of this kind he has announced that those Interior Ministry troops will now be under his command, though it would appear that there are certain legal and constitutional problems with that.

The question is, should the European Union, which is a "value based organization" as it was explained to me in Oxford yesterday evening, make some kind of a comment or statement on this extraordinary sequence of events? Whatever happened to the common foreign policy, whose purpose is to spread peace and happiness, as well as motherhood and apple-pie around the world? What is its attitude to a country on the EU's border?

Email ThisBlogThis!Share to TwitterShare to FacebookShare to Pinterest
Labels: Ukraine