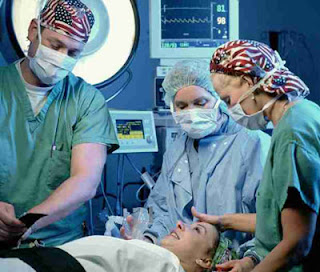 Dominating the BBC news this morning was the imminent arrival of the government's proposals for a new healthcare directive, although the BBC website now tells us that Brussels has actually delayed releasing its "controversial proposals".

In a manner to which we have become accustomed, though, the BBC paints a resolutely rosy picture of the proposal – whether it appears today or not – describing it as a measure "…that would have made it easier for patients to travel abroad within the bloc for health care."

A similar line is taken in The Times - one of many reports – which heralds the imminent arrival of the proposal with the headline, "Patients to beat NHS queues in EU plan for open health market". Thus does the paper tell us that:

Patients will find it easier to escape NHS queues and head across the Channel for treatment under an EU blueprint for European health tourism to be published tomorrow.

It will guarantee that, in most cases, treatment within the European Union will be funded by the taxpayer. The move will open up competition between the NHS and European health services and is being hailed as a big step towards an open market for public healthcare.

The superficial attraction of this measure, however, belies its more sinister intent, and the profoundly dangerous implications, not only for the provision of healthcare services in the UK, but for our national sovereignty. To these we have referred in earlier posts, specifically here, here and here.

The headline issue, of course, relates to the celebrated case of Yvonne Watts (discussed in the posts linked above), who went to France for a hip replacement in 2002, followed by the refusal of her local health funder, Bedford Primary Care Trust, to pay the bill. This led to a legal battle in the ECJ, which reaffirmed the right of patients to seek treatment elsewhere in the EU, without prior approval, if they were suffering "undue delay".

Predictably, Edwina Currie, former junior health minister (of salmonella in eggs fame) and notorious Europhiliac - and also spokeswoman for the Patients' Association – dismisses any deeper agenda, telling The Times that: "This is not about individual countries giving up their health services to Brussels. This will affect a number of people like Mrs Watts who have had to wait too long for routine surgery."

In fact, though, the new proposal issue pre-dates Yvonne Watts, and represents of formal intervention by the commission in a policy area which has been opened up by the legal adventurism of the European Court of Justice, not least through its landmark ruling in July 2001 on the B.S.M. Geraets-Smits v Stichting Ziekenfonds.

What this did, reinforced by the Watts case, was define healthcare as a "service" within the meaning of the treaties, and thus bring healthcare provision fully within the competence of the EU, allowing our central government to become a major player in the provision and management of healthcare services throughout the EU member states. It was precisely that opening which the commission acknowledged in is consultation document last year, when it stated:

In its rulings, the Court made clear that when health services are provided for remuneration, they must be regarded as services within the meaning of Treaty and thus relevant provisions on free movement of services apply.

Thus, the proposal for a new directive is a "Trojan horse" and we can expect to see over term greater and more detailed EU intervention in the provision of primary healthcare. This will lead to member states' freedom of action being progressively circumscribed, with a similar distortion of heathcare priorities.

The point, as always, is that there is an intensely political dimension to this, which can be adduced from the commission's own healthcare website. It declares:

A key priority of the European Union is achievable and effective mobility for EU citizens. The Community is working to encourage open and easily accessible opportunities for citizens to move around the Union for educational, professional, healthcare or other purposes. A major aim is to make it easier for citizens to take advantage of the benefits of European integration and the European Single Market.

In other words, the primary policy aim of the EU, in respect of health care, is not – as is the case with member state governments - the provision of health services to the indigenous population, but the pursuit of European integration.

Whatever temporary (and limited) benefits might accrue from commission intervention, therefore, the net effect is to open up healthcare provision to another player which has its own agenda, one completely different from that which drives those who pay the bills and use the services.

In term of the bigger picture, what we are seeing is Whitehall losing its monopoly control over the health service. It is now sharing power with the central government in Brussels, to which it becomes subordinate in this policy area, in common with many other policy areas where it has already abandoned its monopoly.

Given the dire structure and management of the NHS, there will be voices who argue that this is no bad thing, except that one might need to remind oneself that the power is going to the same organisation which is so famed for its superbly efficient management of our fisheries and agricultural policies.

But, if that is a credible argument, there is no difference in principle in using the same argument for, say, defence. Since the management of the MoD is dire, should we not be looking to place power over defence in the hands of the EU commission?

Unfortunately, within the current treaty structure, this government undoubtedly feels it has no option but to go along with this directive. But, if it follows the same line, that means a new Conservative government will also face the prospect of its freedom to develop new initiatives in the provision of healthcare being circumscribed, as it is forced into a mould increasingly dictated by Brussels.

And this is but one measure in a week that has seen major other increments in the progress of European integration, with the White Paper on the "Integration of EU Mortgage Credit Market" and the Laval un Partneri Ltd judgement. Yet, with the focus on the new treaty, all these derive from earlier treaties and are actually based on the fundamental principles of the European Union, embodied in the original Treaty of Rome.

Going back to the period in the 1970s when there were earnest discussions on our joining the then Common Market, no one could have dreamed that, in one week over thirty years later, we would have seen measures which extended the Brussels remit into our health service, into our mortgage market and our fundamental labour laws - most of which has happened completely under the domestic political radar.

For this and many other reasons, it becomes more and more imperative that the Conservative party takes a long hard look at where the whole integration process is going. It is no longer enough just to erect a dam against the Lisbon treaty – or the next one, which surely will come. It urgently needs to work towards forging an entirely new relationship with the EU, one in which the inexorable march of integration is not only arrested but reversed.

In the absence of that, the next general election will be that in name only. In fact, it will be an electorally mandated reshuffle. We will change the faces in domestic politics but the real government (in Brussels) - and its policies - will remain the same. That is the measure of the beast.