The things done in the name of being green 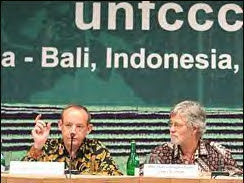 The Metro newspaper, one of London’s freebies, has a special section on its website on the subject of Green Hysteria Climate Watch, which, interestingly enough, never publishes a single article that does not fit the accepted we-are-about-to-die-by-drought-or-flooding-or-whatever because of the wicked Americans and their supporters who will not sign up to Kyoto.

For instance we have seen little reference among all the hysterical hype about what might or might not happen in the next fifty years and how we must all go back to the Stone Age in order to preserve Mother Earth to the following:

U.S. carbon dioxide emissions from burning fossil fuels decreased by 1.3 percent in 2006, from 5,955 million metric tons of carbon dioxide (MMTCO2) in 2005 to 5,877 MMTCO2 in 2006, according to preliminary estimates released today by the Energy Information Administration (EIA).

This compares rather well with the non-reduction among all the Kyoto signatories.

A long posting on Umbrella 3 that is seriously inclusive in the topics it covers.
Posted by Helen at 16:32