Let's not get emotional … 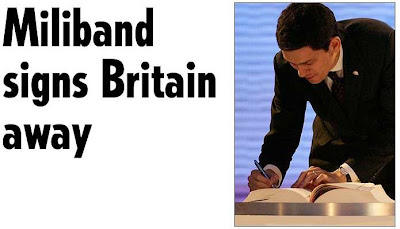 … he said glibly – having railed all yesterday at the perfidy of our ruling classes. The headline above is from The Sun and there is plenty more where that came from – we'll have a look at some of it later today.

Strictly speaking, though, Millibland hasn't "signed away Britain". It isn't within the power of the slime that calls itself our "leaders" to do that. What he has done is given away a huge tranche of powers and transferred the seat of our central government to Brussels - a government to whom we owe no duty, no loyalty or obedience.

It isn't over yet, of course. There is still the ratification, and the Lords could give the government a hard time on the referendum. It will be a pleasure watching them squirm.

In the meantime, we don't need to get (too) emotional. I prefer cold, hard hatred, from the deepest recesses of my soul, combined with a studied contempt for these fools who think they can ignore the lessons of centuries and run rough-shod over us. They have had their fun – the reckoning is to come.