What is Turkey playing at? 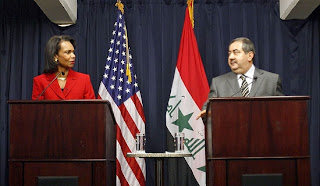 Yesterday’s Spiegel, reporting on the Turkish attack on what they call PKK targets in Iraqi Kurdistan (or the Kurdish part of Iraq, depending on where you are standing), was a little snooty.

The attack came a day before the next lot of those never-ending negotiations with the European Union, which, as Spiegel clearly thinks, ought to be pre-eminent in Turkish political mentality.

Ankara may be upping the ante in its efforts to tackle Kurdish separatists across the border in Iraq, but its timing leaves something to be desired. A cross-border incursion by Turkish troops on Tuesday morning came just before US Secretary of State Condoleezza Rice landed for a surprise visit in the northern Iraqi city of Kirkuk, just south of the Kurdish region. And it came on the eve of Turkey entering a further round of talks with the European Union on Wednesday.

Then again, one could argue that the timing was carefully chosen to coincide with these events. As we have pointed out before, allowing the PKK to establish itself in Iraq (or Iraqi Kurdistan) and to launch cross-border attacks on Turkey and not to expect the latter to do something about it was the height of folly. The one thing the army, the secularist parties and the Islamist AK are united on is that the PKK has to be dealt with. I expect the Kurdish parties disagree but they are not much consulted on this issue.

This was the first cross-border incursion by Turkey and followed Sunday’s air attack that had killed one woman and was condemned by both the Kurdish regional government and the Iraqi Prime Minister.

The Iraqi government in Baghdad had already condemned Sunday's air strikes which killed one civilian woman. Baghdad said Ankara should coordinate any future military action with them.

As it happens, the two bodies do not always see eye to eye, as the issue of Kirkuk, the city visited by Secretary of State Rice yesterday demonstrates.

By late afternoon, as Deutsche Welle reported, the Turkish troops started withdrawing and it is not clear whether there were any casualties. This does not sound like a serious attack, more in the nature of a warning shot and it defies reason to assume that the Turkish authorities, political and military had not planned it very carefully.

Nor does it seem likely that the planned attack was unknown in Washington DC. It is now fairly widely known that after President Bush’s meeting with Prime Minister Erdogan the United States have shared information with Turkey about the precise position of some of those PKK camps. 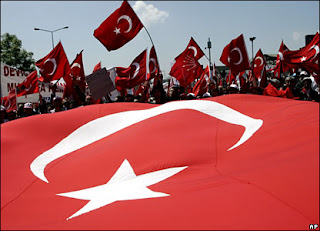 The questions are, as usual, who knew and when did they know. Was Secretary of State Rice briefed? Did the Turks know about the surprise visit before they decided to send a few commandos over the border?

The Kurdish authorities are convinced that the Americans were aware of the two attacks and agreed to turn a blind eye. The head of the Kurdish regional government, who had previously threatened Turkey with an almighty war if they as much as flew over the supposed PKK camps, refused to meet Condi Rice.

While the United States does not want trouble in northern Iraq (or Iraqi Kurdistan), which is the most secure part of the country at present, the idea that the PKK will keep it that way is not entirely plausible.

After meeting Iraqi officials in Baghdad, Ms Rice said the US, Turkey and Iraq shared a common interest "in stopping the activities of the PKK".

She argued that the separatist rebel group threatened to undo the progress that has been made in northern Iraq.

The Iraqi government sort of agrees and announces itself to be disturbed by the presence of the PKK while it also worries about possible threats to civilians though acknowledging that all the Turkish attacks were on sparsely populated areas. In any case the Iraqi government has little say in what happens in the Kurdish areas.

OK, so what about the EU and the negotiations about Turkey’s putative membership, already opposed by France vociferously and Germany with others, somewhat more quietly?

Spiegel has no doubts on the subject. Turkey is going to be punished by the EU. Or, at least, disapproved of:

The timing of the Turkish aggression may be unfortunate for Ankara's hopes of eventual membership of the European Union, which is already resisted by some EU countries, in particular France. Turkish officials are meeting with EU counterparts on Wednesday to formally start negotiations on two of 35 areas where the country needs to apply European law before it can start the accession process.

Brussels has voiced concern over the country's military adventures in northern Iraq. On Monday, in response to the air raids at the weekend, the Portuguese EU presidency urged Turkey to "exercise restraint, to respect the territorial integrity of Iraq and refrain from taking any military action that could undermine regional peace and stability."

The Turks might point out with some justification that PKK attacks into Turkish territory and the killing of Turkish soldiers does not do a great deal for regional peace and stability, whereas the EU’s threats to sort out Chad or the presence of French troops in the Ivory Coast do not exactly concern matters of life and death for the Europeans.

As it happens, there are ever more noises from Turkey that indicate certain weariness with the EU and its games. As we have reported, for instance here, ever more Turkish voices are sounding doubtful about the need for the country to join up to an organization they might not like. Naturally enough, this is not official policy but the noises are becoming ever more loud.

In a recent article in the Wall Street Journal [available to subscribers only in full], Sinan Ülgen, a leading Turkish economist, wrote that the EU has failed in every attempt to impose its foreign policy ideas.

In an elaborate ceremony on Thursday in the Portuguese capital, European Union leaders signed the Lisbon Treaty that, among other institutional changes, creates a powerful foreign policy czar. Or so eurskeptics complain. But despite their fears that this "high representative" will erode national sovereignty, the EU looks destined to remain a dwarf in the international arena. As long as foreign affairs are subject to unanimity voting, even the most parochial national interests will override the search for consensus.

His argument is that, no matter what happens, the EU’s common foreign policy is hijacked by one of the bigger member states, usually France or Germany. His examples are Kosovo, a mess if ever there was one; Chad, of which we have written too many times on this blog, to link; Darfur, ditto. The EU has not even been able to work out some kind of an energy policy that all member states would agree, did not rely excessively on Russia and involved any of the Caucasian former Soviet states.

Furthermore, Mr Ülgen explains, Turkey is not particularly interested in what the EU demands from it, since it seems unable to come to any useful conclusion on matters pertaining to the Kurdish problem or anything else that might interest the Turks. In the circumstances, why should Turkey introduce reforms that the EU desires, unless they happen to be reforms Turkey wants.

Interestingly, Mr Ülgen explains that this does not mean Turkey is turning away from the West as recent events have proved that its relationship with the United States is closer than ever.

As it happens, my colleague has written about this already in connection with the toys (what else?) Turkey is buying here and here.

Despite all this, negotiations have started in six other areas between EU and Turkey:

Negotiations started today over aligning Turkey's regulations with the EU in the areas of consumer protection and transport and energy networks. Turkey has now started talks in six of the bloc's 35 policy areas and completed one.

For once, it is not only the EU that is playing hard to get. What happens if the Turks tell Sarkozy that if he wants them in his Mediterranean union then he must have them in the European Union as well?
Posted by Helen at 19:06