A victory for Gordon Brown 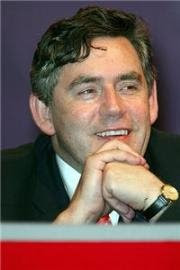 So says Iain Martin in The Sunday Telegraph, telling us to call it what it is: a defeat. He continues:

Those of us who wanted a referendum on the EU constitution have to accept that the cross-party campaign failed. The Reform Treaty, so called after a shameless piece of rebranding, will be signed this week in Lisbon and it would appear that the usual cocktail of European Union fudge and downright lies worked their depressingly familiar magic again.

There will be a cursory debate in the Commons this week, the Government conceded. The Foreign Secretary may even honour MPs by leading the charge for Labour. So total is the collapse in the Government's morale that ministers rarely have the opportunity to be cocky about anything much at the moment. They know that on Europe they have won.

Asking why it happened, Martin suggests that this was Gordon Brown's victory first. His aptitude for the patient, grinding, stubborn work of seeing off opponents should never be overlooked. He took quite a gamble on Europe, but Brown's priority was to establish himself as a serious player on the world stage. He knew he was getting ready to distance himself from the Bush White House. He did not need war breaking out in Brussels as well as Washington.

But, the key – it seems – was that he presumed that while a majority of voters say they care about the erosion of British sovereignty, only a minority do so with passion. So the tactic was: stick this out and it will go away, writes Martin.

That, of course, is more or less what we have been saying for months, so a curious sense of déjà vu creeps in, as Martin then goes on to analyse the reasons for the quiescence of the public. He tells us:

It would appear that while the British do not much like being sucked into a European super-state, there is no expectation that the process can be stopped. That attitude might have its origins in the rise of a shallow, consumerist society in which matters of substance are simply shrugged away: or is there more to it than that? Is it not that voters know they have been lied to in the past about Europe so many times that they have concluded reluctantly that resistance is futile?

This indeed was our conclusion. When push comes to shove, the prime minister has the power and, if he is determined to use it and has his Parliamentary party behind him, there is absolutely nothing we can do about it. If, to paraphrase Thatch, the gentleman is not for turning, then there is no force that can make him do so.

Thus, Martin counsels "a period of calm reflection" by Eurosceptics of all persuasions. The answer, he says, "is not a turning up of the volume; impotent rage failed in the past and there is no sign it will work in the future." Then we get to the rub: The Conservatives, in Martin's view,

…have much thinking to do on how to reverse the drain on sovereignty without looking obsessive. Some of the party's MPs want to tie David Cameron into promising a simple referendum on this treaty after the next election. That is kamikaze politics. Look forward two and a half years: should the Tories really have in their manifesto a pledge to hold a referendum on a treaty most voters will have forgotten and were insufficiently angry about when it was approved? The next election will be about Brown's and Cameron's fitness for office, not old treaties.

But what it boils down is that, if the Conservatives win the next election (and that looks increasingly likely) they will have to find a way to do more than talk a good game on Europe. They cannot delay a plan forever.

With that, we cannot disagree. It there is ever to be any reversal of the tide of European integration, it is going to have to be via the Conservatives. And, although – as we pointed out over a month ago - there is much thinking and discussion going on inside the Party, precious little of this is visible from the outside.

The fear is that all they have in the locker in a plan to "talk a good game on Europe", reliant on a meltdown of the Labour government to put them into office, leaving real policy on the EU in the "too difficult" file. When it comes to the next election, the focus will indeed be on domestic issues, plus Brown's and Cameron's fitness for office. Thus, Cameron may chose simply to offer an anodyne form of words aimed at bringing voters into the fold, rather than saying anything which might commit him to serious action.

By then, the treaty of Lisbon will be an old memory and only the most optimistic of Eurosceptics will harbour any illusions that it will become a significant general election issue. So, win or lose, at the general election, Brown will have already won his victory – and the Tories may not demand a re-match.

The final salvation, therefore, will probably have to come not through the ballot box but in the manner we always thought most likely – as a result of the collapse of the EU. That, we can confidently predict, will happen – but we cannot say when. All that is left to us is to do everything possible to hasten the day, and hope it comes sooner rather than later.