An alternative to committing suicide 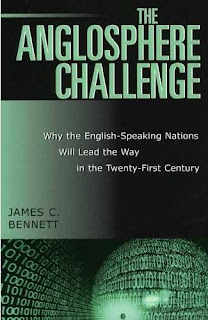 Asked for his views on an alternative to the EU, Alan Sked, the founder of UKIP, famously noted that the alternative to suicide was simply not to commit suicide.

The logic of this is absolute. Such are the dynamics of trans-national organisations that, even if the EU was replaced with a completely different structure, the new organisation would, in the fullness of time, end up with much the same world view and aspirations as the body it replaced – presenting just as much a threat to the survival of nation states.

Today, John O'Sullivan in the Telegraph op-ed gives sustenance to that view, advocating the concept close to the heart of this blog, namely the Anglosphere.

As a long-term supporter of the idea, he frames it to perfection, describing it as a "network civilisation" which has the capability to mature into a more formal arrangement creating what a "network commonwealth". These, says O'Sullivan, may end up being more integrated - psychologically and socially, as well as economically - than consciously designed entities such as the EU.

Strangely enough though, we get another of those dichotomy of views between the headline writers. The print edition sports the title, "The Anglosphere could be the making of Britain if we dare", while the online version heads up with the question, "A British-led Anglosphere in world politics?"

The latter title is highly misleading. A loose "network" that would encompass such nations as the United States, Canada, New Zealand, Australia and India, would never accept British leadership. As to India, the growth in its economy and its emergence as a regional power are set to make it a greater economic and military force than the UK in the foreseeable future.

The question is, therefore, not whether Britain could or would lead the Anglosphere but whether indeed it could even participate in it, as we are drawn inexorably into the European sphere with the advent of the Lisbon treaty and treaties yet to come.

Already, as we have pointed out, there is a strong defence component in the Lisbon treaty, which brings us that much closer to creating a common defence structure, and pressures within the Union are building up to make this a reality.

Despite the advances triggered by the 1998 St Malo agreement between Chirac and Tony Blair, however, the process of European defence integration has largely stalled. We have noted an increasing lack of enthusiasm, amounting to direct obstruction of the European ambitions, to the extent that the UK can no longer be counted as an active partner in the process.

Interestingly, although the active promoter of the European defence identity in the days of Blair was France, Sarkozy does not seem to be demonstrating the same enthusiasm as his predecessor either. Possibly as a result, the guardianship of the flame seems to be passing to Germany, from which the most strident voices can be heard.

German enthusiasm for a European army, however, is not all it seems. Rather than being an expression of strength – and a desire to dominate Europe, as some fear – it is a sign of the country's continued weakness. Still haunted by its conduct during the Second World War, Germany's leaders wish to take a more active role in world affairs, but lack the self-confidence to do it alone – not least because of the reaction of its neighbours to a resurgent Germany.

Thus, German policy is the same now as it was in 1954 which saw the first attempt at forming a European army – to clothe its military and foreign policy ambitions in "Europe", vesting control in a supranational authority, to reassure it neighbours that it has no ill-intent towards them.

Some progress has been made over the last fifty years since 1954, but it has been glacial and, even today, the European army is regarded as a long-term project. Therein lies the bigger problem for the Europeans. Events await for no man, and certainly not for the Europeans to get their act together and field a credible force.

Furthermore, the nature of the threat is changing and, while the Europeans gaze studiously at their navels, those forces which are actually engaged in fighting the new threat – the war against terror – and evolving new equipment, tactics and doctrines, leaving the European further and further behind.

Added to that, there is an anti-militaristic ethos pervading Europe, with a widespread reluctance to spend the necessary sums on equipping and maintaining modern armies, further diminishing the capabilities of the European forces. And, some of the EU member states which do show enthusiasm for defence integration see in the project not an opportunity to exert greater power, but a means by which they can spend even less on defence than they do at present.

Thus, the reality behind the ambitions of European military might is that the member states cannot deliver, neither individually nor collectively, and there is no prospect of them doing so in the foreseeable future. And, so far are they slipping behind that, should they ever be able to develop the political and command structures that would allow them to operate on a European level, their capabilities will be substantially less than optimal.

That brings us back to the Anglosphere. The UK, having taken a more robust and proactive role in world affairs, cannot wait for the Europeans to get its act together. After a flurry of activity post-St Malo, European co-operation has weakened while the UK's adventures in Iraq and Afghanistan have strengthened co-operation with Anglospheric partners such as Australia and Canada, as well as the United States.

The degree of US co-operation has emerged from the accounts of the recent re-taking of Musa Qala where, not only were 600 troops from the US 82nd Airborne Division deployed – using more helicopters in that one operation than have been deployed by the British in the whole theatre – but the US command was intimately involved in the planning and execution of the operation.

It is perverse, therefore, that just at the time when the UK is working so closely with the Anglosphere, it should be signing up to a tranche of further European integration, in the Lisbon Treaty. In the final analysis, though, deeds may be worth more than words on a piece of paper. The threats we face are real, while the treaty remains a European fantasy which cannot deliver.

On that basis, the print edition heading of O'Sullivan's article may be close to the truth: "The Anglosphere could be the making of Britain if we dare". But there may be another truth. The Anglosphere could also be the undoing of attempts to draw the UK deeper into the maw of European integration. As an alternative to committing suicide, it has much to commend it.