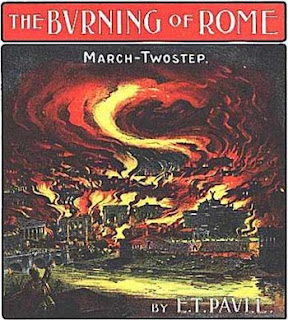 Just occasionally, you read a comment piece in a newspaper and you say to yourself mentally, "yeah, that's right! The man (or woman) is on to something".

Storming into that category is the comment by Iain Martin in The Daily Telegraph today, headed, "Are we powerless to determine our fate?" It opens with the words:

As our political class fiddles around at Westminster, obsessed with the relatively pathetic amounts of money involved in the party funding crisis, over in the engine room of the British economy there is the smell of burning.

Martin is focused primarily on the looming economic crisis, which we all know is coming but which is being treated with an ostrich-like determination to ignore the bad news until it kicks us in the teeth. Thus, writes the man:

A £30 billion shortage of capital for the markets will make it difficult for those attempting to renew mortgages, just as consumer confidence slides. Merrill Lynch is warning of dark days for America and says Britain is also in line for a "rebalancing" - which sounds like a bland term for something quite nasty.

But the thrust of the piece is wider, with Martin writing about, "the impression … of drift…", arguing that the Government "really does not know where it is going." For now, he adds, "there is a new British lack of confidence emerging, rooted in the fear that we cannot seem to get anything quite right," then going through a litany of complaints, concluding thus:

We imprison an underclass on squalid housing estates and deny them opportunity in the name of welfare. Our population is about to rocket, but we shrug and say there is nothing that can be done, because we have lost control. Is it beyond our wit and wisdom to innovate as our ancestors were forced to?

The Brown Government is steadily coming to symbolise what can only be described as a creeping national malaise. Until quite recently, we helped to shape events: now Britain seems to be constantly at their mercy.

The phrasing that particularly sticks in the mind is his text: "…we shrug and say there is nothing that can be done, because we have lost control." This is a sentiment that precisely mirrors that which I wrote yesterday, albeit in respect of the fishing issue, but worth repeating here:

It is perhaps apposite that, today, there is to be the annual fishing debate in Parliament – prior to the fisheries ministers toddling off to Brussels to be told how many fish our fishermen can catch next year.

For us old hands, these used – in the late eighties and early nineties – to be the stuff of high drama, with angry MPs demanding action to save the industry, with threatened rebellions and knife-edged votes which had the potential to bring John Major down.

Now, though, the heat has gone. It is not that the situation is better – it is immeasurably worse. But MPs, like the rest of us, are resigned to the fact that, "there is nothing that can be done, because we have lost control."

There will be a few ritual protests in a poorly-attended chamber, the minister will deliver yards of extruded verbal material and then it will be over for another year. And nothing will change. The media, most likely, will not even bother to report the debate – when it was once the stuff of front pages.

And that in part explains the obsession with "donorgate" and the preoccupation of the political classes with PMQs, scoring the jousts between Cameron and Brown, breathlessly analysing the exchanges to determine who "won". This is one vast exercise in displacement activity, channelling energy into trivia and ephemera, simply because real world problems have been consigned to the "too difficult" box.

Thus, Iain Martin is indeed capturing the mood. There is a sense that the political classes are fiddling while Rome burns. What they perhaps do not understand is that we would have them consigned to the centre of the conflagration, whence we will turn off the hydrants and watch them burn in the flames of their own making.