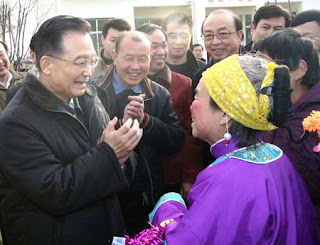 This is the time of year, in case you had not noticed, when the media goes into overdrive with its reviews of the last year and its predictions for 2008 – if for no other reason than – Pakistan apart – there is no other hard news that the media can be bothered with, and they have to fill the airwaves and the pages of their newspapers with something.

One listens, therefore, with only half an ear to the radio as the high and the mighty drone on with their prognostications and it was in that mode that I caught something on BBC Radio 4's From our own correspondent programme. It had gathered its foreign correspondents from near and wide, asking them each for their predictions for the coming year, but what made me sit up was blunt warning from the Asia correspondent that there would be "food riots in China".

By coincidence, England Expects picks up another strand of the same story, retailing a report in the Financial Times that China is to introduce taxes on grain exports "in the latest attempt to rein in food-driven inflation that reached an 11-year high in November."

From this we learn that exporters of 57 types of grain, including wheat, rice, corn and soya beans, will have to pay temporary taxes of between 5 and 25 percent. Furthermore, this move comes less than two weeks after China, the world's biggest grain producer, scrapped a 13 percent rebate on major grain exports in an effort to increase domestic supply and rein in inflation that hit 6.9 percent in November, well above the government's three percent target.

Elsewhere, we see from Xinhuanet that China's grain subsidies were up 66 percent in 2007, to 51.4 billion yuan (6.9 billion U.S. dollars). Despite that, production was short of demand, even with a harvest of more than 500 million tons of grain, the fourth consecutive year of growth.

Then, we also learn that Chinese Premier Wen Jiabao has been visiting farms and rural enterprises in the northeast province of Shaanxi (pictured top and below right), while his administration is pumping money into land reclamation programmes in a bid to increase the amount of land available for cultivation.

On top of that, the influential Central Economic Work Conference has decided that that prevention of "current price increases from becoming evident inflation" would be a primary goal of macroeconomic control in 2008, leading the government to focus on "national grain security" and the continuation of boosting farmers' income next year. 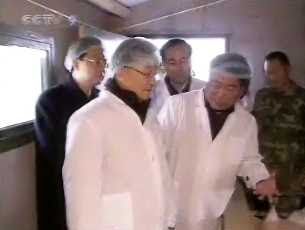 To add emphasis to that message, Chinese Vice Premier Hui Liangyu on Sunday attended a ceremony honouring "advanced grain producers", when he urged for more effort to be devoted to agricultural modernisation.

Bearing in mind that China is by no means an open society, and has strict control over its media, the underlying message coming through is that there is a sense of crisis over food supplies. The BBC foreign correspondent may well be right in predicting food riots – otherwise one would not be seeing this huge concentration of effort by the Chinese government on the issue.

But, what applies to China also applies to the rest of the world yet, as England Expects remarks, none of the political leaders make any reference to the growing crisis in their New Year messages – despite the obvious and very real effects it will have on the economy and the poorer sector of our society.

As we have remarked many times (for instance here and here), this lack of engagement reflects the lack of engagement on the EU front, where European politicians have not even begun to address the seriousness of the situation. Instead, they have been raiding the CAP account to pay for their Galileo vanity project - a monumental act of folly.

Lacking political leadership, the food security issue is not being picked up in any serious sense by the national media, which means that when polling organisations like You Gov construct their questionnaires to discover what they think are the issues of importance to ordinary people, they fail to include issues like "food security" and "food inflation" on the list of options. Thus, as we saw in the survey for The Sunday Times yesterday, the top three in the list of concerns were, "anti-social behaviour", immigration and terrorism, with "global warming" coming sixth on the list (see below).

The bizarre detachment of this list belies the fact that the EU is still pushing ahead with its insane plan to demand member states meet a 10 percent quota for biofuels, despite even environmental groups warning that it will be a disaster.

Yesterday though, Christopher Booker in his column remarked that when history comes to be written, "2007 may well be marked as the significant year when it first registered that the disaster-movie threat posed to the planet by global warming might not be roaring down on us quite as predicted."

In the nature of scares – and such is the concern over global warming – these do not die out, as such. They are most often driven out, to be replaced by a greater or different concern. Thus, when the history of 2008 comes to be written, this may be the year when food security displaced global warming and the number one concern, as the reality of global food shortages finally struck home (although it may take a little longer).

With that realisation, one hopes, we will also begin to understand that successive British governments have transferred their powers to deal with such a crisis to Brussels, where agriculture is a sole "competence". Thus, as the crisis begins to bite, we will have the familiar but still unedifying spectacle of British ministers rushing off to Brussels to plead for relief.

There, one suspects, we may get short shrift. Although Britain is a major importer of food (bringing in some 60 percent of our annual requirements), other countries in the EU – most notably France – are net exporters. What will be catastrophic for the British economy, and the well-being of our people, will be good news for the French economy, which means we will be out on our own.

In addition to the shift in concerns, therefore, 2008 may well be the year – if the media wake up to the fact - when we as a nation realise just how much our governments have given away to Brussels, and the true cost of so doing… just at the time Mr Brown has agreed to give the EU even more powers.