"Be of good comfort, Master Ridley" 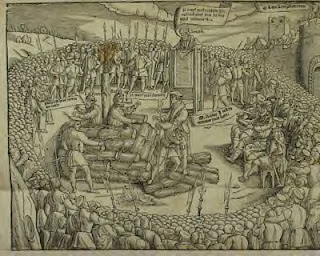 The last words of Bishop Hugh Latimer to Bishop Nicholas Ridley as they were both being burned at the stake in Oxford (the Memorial is one of that city’s tourist attractions) for refusing to recant their Protestant views were supposed to be:

Be of good comfort, Master Ridley, and play the man; we shall this day light such a candle, by God’s grace, in England, as I trust shall never be put out.

It is always useful to look at historical antecedents, both in this country and elsewhere and it grieves me, as a supposedly trained historian (stop giggling at the back), that so few of the eurosceptic movement at its widest know or care about history. In fact, too many are proud of their ignorance.

I am not suggesting that anybody is about to be burned at the stake or even arrested for inconvenient opinions. I have, in the past, drawn certain parallels and pointed to certain differences between our fight now against an enemy that is inside and outside the country and a similar fight during the sixteenth century.

Now I wish to refer to something else that is happening. In my opinion there is much to be of good comfort about (not excellent comfort, just good). After all, Bishop Latimer was uttering those words when matters must have looked quite bleak to him and his fellow martyrs, not just for themselves but for their country and her people.

I have tried to steer clear of the Constitutional Reform Lisbon Treaty on this blog (though, as ever, I have recorded an interview for the BBC Russian Service on the subject) because I do not hold with hysteria. All that weeping and wailing and gnashing of teeth. Please. A little self-control is required, not to mention a little straight thinking.

In the first place, this treaty does not destroy the country any more than the previous three did. As I recall (and my memories go back to the Maastricht Treaty when I became actively involved in the eurosceptic movement) similar weeping and wailing and gnashing of teeth took place then as well.

The only people who can destroy Britain are the people of Britain. Admittedly, they are going the right way about it, what with not knowing any history and refusing to learn how to use the greatest language in the world, English, but there is a deal of spoiling in a country and a nation.

This brings us back to the question of British national identity, a topic I have written about a great deal in the past (being half-Hungarian I am the right person to pontificate) and on which I shall write again in the very near future. Can’t leave it all to my colleague, excellent though his pronouncements are.

As it happens, I think the latest treaty is appalling and many of its provisions will be very destructive. I also think that coming out of the EU and rebuilding a country afterwards will be very difficult, especially as we neither can nor should go back to the unsatisfactory status quo ante bellum and many reforms will be needed.

Nevertheless, I take great comfort from recent developments. The shenanigans around the treaty and the blank refusal to ask the people about it have raised many millions of hackles across the European Union. Even supporters of European integration are annoyed and many of them are beginning to wonder whether their support makes as much sense as all that.

Above all, however, the promoters of the Constitutional Reform Lisbon Treaty have solved a nagging political problem for us. They have destroyed the strongest argument the europhiliacs have ever had and that is the one of inevitability.

For decades we have all had to struggle against the inevitability argument, which was supplemented by the “people would like it if they understood it” argument. Well, what price either of them now?

So be of good comfort. That candle has been lit. It may gutter and be windblown but it shall never be put out.

There, my ration of optimism is all used up.
Posted by Helen at 00:28