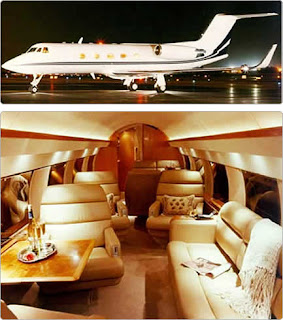 Thanks to Tim Worstall, who, as I have mentioned before, actually reads the Guardian assiduously, we find this delightful little vignette. It seems that:

The Ugandan president, Yoweri Museveni, is to buy a new Gulfstream presidential jet for £24m after convincing MPs that his £16m aircraft bought seven years ago is out of date.

Well, I suppose it must be. As our readers recall I know nothing about toys (that picture was chosen by my colleague as neither of us trusted me to find the right one) so I readily accept that a seven year old 534 G4 jet is too passé to be contemplated by a self-respecting African tyrant statesman.

Gulfstream, an American manufacturer, did not want to comment on the sale. But Karooro's [Mary Karooro, chair of presidential committee] assertion that the current jet was "a threat to the president's security" appears questionable unless the aircraft has been badly maintained. Of the 535 G4 jets sold by Gulfstream since 1987, more than 500 are still flying today.

We have been here before. When the last jet was acquired because it was absolutely essential for presidential pomp safety there was something of an outcry in the country and outside it. The IMF and the World Bank deferred a decision to cancel Uganda’s £400 million debt.

The deferral did not last long. In 2005 the G8 Finance Ministers agreed on 100% debt cancellation for 18 countries of whom Uganda was one. Even that was not deemed to be sufficient as this press release from an organization calling itself "50 Years is Enough" demonstrates.

While I would agree that it is high time we disbanded the IMF and the World Bank I find it a little difficult to understand why debts incurred by kleptocratic tyrants great Third World statesmen should simply be cancelled and why they should be given endless amounts of taxpayers' money to equip themselves with the latest in luxury technology.

The Gulfstream jet is not the only thing.

In Kampala, newspapers were roundly critical of the decision to upgrade the jet, reminding readers of Museveni's famous speech when he came to power in 1986, in which he mocked the expensive tastes of African leaders. "The honourable excellency who is going to the United Nations in executive jets, but has a population at home of 90% walking barefoot, is nothing but a pathetic spectacle," he said at the time.

His government has spent already lavishly this year, forking out £79m on hosting the Commonwealth Heads of Government Meeting (Chogm), and a reported £27m for a presidential palace refurbishment. In an editorial, the Weekly Observer questioned the president's priorities, noting that "parts of the country are ravaged by floods, Ebola, cholera, malaria, and even plague!"

The only thing I find cheering about this is that there are still newspapers in Uganda that can publish the truth. Not that they can do anything about changing what happens because happily for Museveni, the West will provide him with the wherewithal.

Britain, for instance, announced last year a ten year £700 million "poverty reduction" package. So, errm, is any of that going on the new presidential jet or the palace refurbishment. Certainly not! How could you even ask such a question?

"All UK aid that goes directly to the Ugandan government is for poverty reduction purposes and supports the national poverty eradication action plan," said the Department for International Development. "It is accounted for by the ministry of finance and the Bank of Uganda and donors actively review these accounts."

Phew, that's all right, then. Only thing is, has the Department for International Development ever heard the word "fungible" and does anybody in that department know what it means?>
Posted by Helen at 15:38