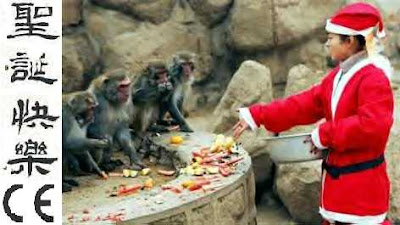 Like it or not, much of our Christmas cheer this year is provided courtesy of the People's Republic of China, a heathen land which is only too pleased to earn a buck or two, capitalising on the spending binge that has become the substitute for religion in this country – Blair notwithstanding. The picture, provided by Anoneumouse is an only too accurate reflection of our relationship.

Apart from living off the back of the Chinese, we are also living off the influx of immigrants who have driven down wages, plus historically low commodity prices – together with the availability if cheap consumer goods from China – have combined to keep inflation low, while the raft of consumer (and government) debt have kept the economy buoyant.

But all good things come to an end. While we still have a free flow of immigration, the social stresses are building up to such an extent that even our notoriously insular politicians are finding them difficult to ignore. This means they are having to find ways of reducing the inflow, with the effect that downwards pressure on wages will slacken.

Commodity prices, as we have charted on this blog, are increasing, not least the oil price, which is at an all-time high and set to go higher, while, as the demand for tighter standards and higher wages bites into the Chinese economy, prices can only go one way.

Thus, given the current "credit crunch" and the imminent – according to some – collapse of the world economy, there is little to be cheerful about, even without contemplating the Lisbon treaty and the carefully staged coup d’état by the "colleagues".

However, this day – Christmas Day – is not a time to be miserable. We have 364 days in the year to devote to “snarl mode”, the prevailing ethos of this blog – which finds enough favour with readers that we continue to demonstrate slow but steady growth. At this rate, in another six thousand years, we might actually match the Daily Mail circulation, albeit that The Sunday Times has predicted that, by 2022, blogs will be extinct. 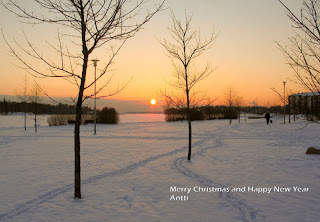 In between then and now, I reckon that gives us plenty of opportunity to express our views except that, without our readers, the whole exercise would be somewhat pointless. Thus, it falls to me – my co-editor will speak for herself – to thank our small but loyal band who not only visit the site but, according to the dwell time recorded by our counter, actually read our stuff.

The experience of blogging itself has opened up a new vista in both our lives – what started as an exercise in projecting our thoughts has developed into a two-way exercise, bringing us many virtual friends who in many ways have enriched our lives - pace a message we received this evening (above right).

I must also thank the even smaller but dedicated group who joined us in our Umbrella venture, an enterprise which started with high hopes and, despite the technical and other difficulties involved, is maturing into a valuable community which has much to offer the blogosphere. I hope to have news in the New Year about how we can develop the initiative.

For this day, though, the one and only message we have for you all is that simple and enduring wish – Merry Christmas. It is too much to hope for a happy New Year, although their Lordships sticking to their guns and forcing a referendum on the loathsome Lisbon Treaty would do something towards bringing that about.