The failures of our government 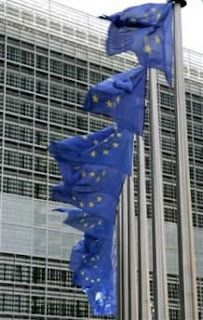 The headline, for once, captures the mood of the Booker column. Applied by the subs after the column is written, often we do not see it until the paper is actually published – and then it is too late to do anything about it.

But this one proclaims - with a due sense of irony - "The top six achievements of our new government", which in its studied ambiguity will have most people expecting a rant about the ever-growing failures of the Brown government. It is thus a clever way of pointing out that we have another government – a supreme government – over in Brussels.

It is the continuous failure of the political classes and the media to recognise and highlight this fact that leads to much of the public inertia over the European Union. Much of the discourse on "Europe" is projected through the filter of domestic politics, while "Brussels" is "over there", not much reported and then in a disjointed fashion.

And, while the political commentators are quick to point out (rightly) that this and that (UK) department of state is "not fit for purpose", entirely lacking is the same degree of outrage at our other government, which in its entirety is not fit for purpose.

Thus does Booker offer a corrective, picking on six issues where the EU predominates. He starts with the Common Defence Policy, and the abject failure of the EU to organise the military force in Chad and surrounding areas, making a total mockery of its pretences of being a military (or any) power.

He moves on to the crushing failure of EU diplomacy over Iran, pointing out that this flagship aspect of the EU's common foreign policy has been nothing more than an exercise in appeasement, sucking up to the dictatorship of the murderous Mullahs, while seeking to destroy the very force which could bring democracy and relief to Iran, the People's Mujahideen of Iran (PMOI).

We then get a brief dissertation about the failure of the CAP, with Booker reminding us that, "a frequent misconception about the CAP is that it was set up to encourage farmers to grow more food." In fact, he tells us, its purpose was to manage food surpluses created by the post-war subsidy system – a system which spectacularly failed, leading to huge and expensive food mountains. But now, with structural shortages in world food production, we are left with a policy instrument – imperfect at best – designed to deal with surpluses, and wholly unable to deal with the consequences of shortage.

Another failure Booker highlights is the Common Fisheries Policy, noting that even the EU's Court of Auditors admits to that failure, before then noting the egregious failure of the Common Immigration Policy, which led Italy's prime minister, Romano Prodi to bemoan that, "Nobody could have expected such an influx," of immigrants, with the accession of the former communist states, having promulgated a directive that made the situation immeasurably worse.

As his coup de grace, he then points out that the common policy on global warming – based on the flagship "emissions trading scheme", has lead to Britain paying out £470 million while Germany made £300 million profit (despite ordering 26 new coal-fired power stations). NHS hospitals had to spend £1.7 million on credits, while BP and Shell made £40 million. The EU's electricity supply industry enjoyed a windfall profit of £13.6 billion, with the biggest losers UK electricity consumers, whose bills rose by as much as 12 per cent. The net result was that EU carbon emissions rose by 1.5 per cent.

These are only six of the many policy areas, to which must be added “many other glaring examples” of how the EU regime is "not fit for purpose" - such as Galileo space policy (due to cost UK taxpayers £1.7 billion); or the waste policy which has reduced our rubbish collection system to chaos (and threatens us with fines of billions of euros).

Yet, inexplicably, Gordon Brown is so keen to hand even more power to this system that he is prepared to lie about the new treaty, to avoid giving us the right he himself promised us - a vote on whether we want it or not. Why we are not up in arms about it is also inexplicable, about which Iain Martin has some views. We'll look at those in our next post on this blog.