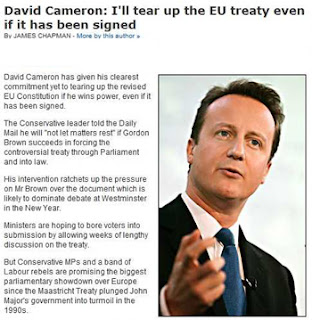 Tory Diary has picked up on the Cameron statement on the treaty ratification (also retailed by The Daily Mail). If anything, though, it is even less impressed than we were. The words used by David Cameron, it says, are almost identical to those used by William Hague last month.

"They are not bankable," it adds. "Eurosceptics who saw much firmer promises made about EPP withdrawal in 2005 are unlikely to be reassured by what looks like tactical wording."

Worse still, we are told: "Although all of the most senior members of the shadow cabinet are sceptical about the EU there is no stomach for a big fight with Brussels … they would not allow a Cameron government to be engulfed by the same 'Euro-strife' that shipwrecked John Major."

What they need to realise, however, is that if elected under the current regime, it would not be a "Cameron government". First and foremost, it would be a Brussels government. They may be happy with an electorally-mandated reshuffle, but if that is all that is on offer, an awful lot of people will not bother to turn out for the vote.