Who should be Person of the Year? 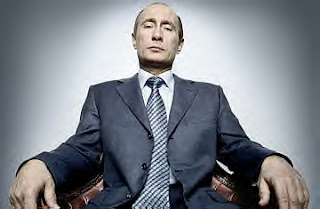 Time Magazine has done it again – annoyed a very large number of people by its choice of Person of the Year. Last year it was the inane choice of “You”, that is the blogger, as long as he or she was of the left-leaning variety.

This year the magazine and its editors have surpassed themselves by nominating President Putin. Why exactly President Putin? What has the man achieved this year? He has not even been particularly successful at running a fraudulent election. A vote of 64 per cent on a 63 per cent turn-out is almost a defeat by Russian standards.

It was quite clear during his rather hysterical election campaign when he accused everyone who thought of voting for someone other than One Russia of being a traitor to the country that he was hoping if not for Stalinist votes of 99.7 per cent, at least for something in the eighties and on a higher turn-out.

Compare that with Islam Karimov’s victory in Uzbekistan where the turn-out was over 90 per cent and the opposition candidates all “publicly endorsed the incumbent president”. Of those who turned out 88.1 per cent voted for Karimov. Mind you, even that was down from the 91 per cent in 2000. They just don’t make ‘em the way they used to.

So what else did President Putin achieve? He has effectively suppressed any opposition to his rule and destroyed any independent media. Then again, he has not succeeded in either of those entirely nor have they been the achievements of this year. There has been a long process.

Economic growth and stability? Hmmm. Again, not the achievements of 2007 and, in any case, not much has been achieved economically except the garnering of high prices for oil and gas. There are now questions raised as to whether Russia will be able to go on producing sufficient amounts of gas though at present international negotiations seem to be riding high.

There is little evidence that any of the money earned from the oil and gas is being invested in diversification of Russian economy.

There is chatter among the international chattering classes that under Putin Russia has once again become a power in the world. That is a matter of opinion as there is no tangible evidence for this.

Unlike the Soviet Union present-day Russia has nothing to offer to anyone outside the country and precious little inside as witnessed by the hundreds of thousands of people who are leaving it for distant and not so distant shores. The only people who are going to Russia from the West are employees of businesses who take up temporary residence.

Where has Russia triumphed on the international stage? The Kosovo crisis is likely to be resolved, at least temporarily, early in the year in a manner that Russia is not going to like, though with a little diplomatic finesse such a situation could have been avoided.

Bullying of neighbouring countries from Georgia to tiny Estonia has not brought Russia anything, not even submission. That bronze soldier in Tallinn was moved and the Estonian government did not resign, despite demands to that effect from Russian politicians.

His unpleasantness to Britain is small scale and petty, documented by us here and here, hurting nobody as much as the people of his country.

There is the wondrous friendship with Iran, which is not necessarily the most sensible thing for a country that has the odd problem or two with terrorists, Chechnyan separatists and Islamists in the former Soviet republics in Central Asia. Furthermore, it undermines President Putin’s credentials as a participant in the war on terror.

So what is it that makes him Man or Person of the Year? Could it be his ever more strident anti-Americanism? Certainly, he became almost hysterical with it during the electoral campaign and in his attacks on the many “internal enemies”, an ominous expression in Russia. 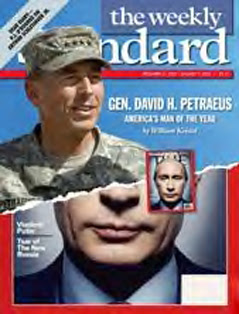 There was a good deal of discontent with Time Magazine’s choice, though most of that was because of Putin’s unpleasant characteristics not because, as we maintain on this blog, he is unpleasant and has achieved nothing.

Some people on both sides of the Atlantic have said (even better on Gateway Pundit and in the Weekly Standard) that General David Petraeus, the commander in charge of the surge in Iraq that has brought levels of sectarian and terrorist violence sharply down and, among other things, allowed Iraqis attend churches on Christmas day, should have been given the accolade. I have no problems with that except that I imagine General Petraeus might not like to be made Time Magazine’s Person of the Year on the Groucho Marx principle.

Apart from General Petraeus who is there? Who could be nominated to be Person of the Year 2007 in any field that one knows of (allowing, of course, for the fact that few of us know about great breakthroughs in, say, medicine that are happening all the time)? Can anyone help? Or, maybe, we, too, should say unequivocally that General David Petraeus is the only one who deserves the title, whether he likes it or not.
Posted by Helen at 00:41