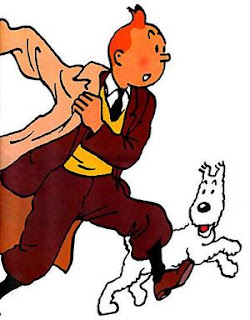 Who would have thought that Belgium will turn out to be the most entertaining country, politically speaking, at the end of 2007? I suppose one can expect anything from a country whose artists and writers were in the forefront of Surrealism. On the plus side, they also produced Hergé, the author of Tintin’s varied and exciting adventures.

Anyway, nobody apart from Perry de Havilland on Samizdata paid any attention to the fact that the Constitutional Reform Lisbon Treaty was signed on behalf of Belgium by Guy Verhofstadt, the man who had lost the election around six months ago but who has been asked to form the interim government.

Perry de Havilland announced that he would go and sign the treaty on Belgium’s behalf because he had as much right to do so as did Mr Verhofstadt and he had a point:

If the people who were voted out of office in Belgium months ago can sign the treaty, then why not me too? They have no more right than I do to sign anything on behalf of Belgium. The fact that the Belgian establishment can and have simply banned popular political parties that do not play by the required consensus should indicate that to all intents, Belgium is not a democracy in any meaningful sense. This latest action indicates Belgium is in fact some sort of divine right oligarchy where being a member of the power elite is all the legitimisation you need.

Hardly a novel idea but the picture of Mr de Havilland signing the treaty on behalf of the Belgians has a certain amusement value. 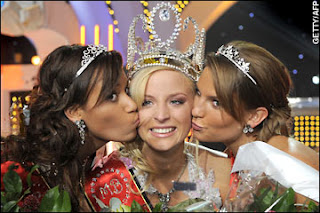 Meanwhile, the Daily Telegraph’s Bruno Waterfield, a hack for whom my colleague has some respect and who is, therefore, superior to other hacks, has produced another cute little tale from the land of surrealism.

It seems that the newly crowned Miss Belgium, pictured here in the traditional picture of the Judas kiss, has incurred the wrath of the Flemish population of Antwerp by being unable to answer even the simplest question in Dutch.

Mr Waterfield does not see what all the fuss is about:

Alizée Poulicek, a 20-year-old language student, was booed by the audience when she failed to respond to questions in Dutch before being crowned Miss Belgium at the weekend in Antwerp, in Dutch-speaking Flanders in the north of Belgium.

Miss Poulicek may be multilingual in French, English and Czech but political correctness demands she also speaks Dutch, the language spoken by Belgium's Flemish majority, whose demands for more autonomy are behind a political crisis that has lasted almost 200 days.

I believe I have already made my dislike of the indiscriminate use of the expression “political correctness” when somebody means I do not like this but have no arguments against it.

Belgium is officially a tri-lingual country and as Mr Waterfield himself acknowledges, the majority are Dutch speaking. Antwerp is a Dutch-speaking town. Miss Poulicek could not learn a few basic sentences in the language? Well, I guess they do not give beauty queen crowns for intelligence. What about jobs to hacks?
Posted by Helen at 16:10

Email ThisBlogThis!Share to TwitterShare to FacebookShare to Pinterest
Labels: Belgium