This issue is not going to go away 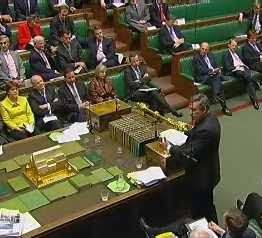 It was inevitable and necessary that David Cameron should yesterday choose to attack Gordon Brown on the referendum for the new treaty he has just signed – this being the day that Brown laid before the House the Bill to ratify the treaty.

The actual event, though, was a report to the House on the European Council held last Friday, dealt with superficially even though it contained a massive amount of material, any part of which could have sustained a full debate. So it is that, in the drama of the moment, the doings of the EU's cabinet should escape all but cursory scrutiny.

Nevertheless, Cameron's performance evoked from The Telegraph the headline, "Cameron attacks 'shifty' Brown over EU treaty", with an equally robust headline from The Daily Express.

Throughout Cameron's attack, the prime minister spent most of the time head down, buried in his notes, unable to look his tormentor in the eye. That was not surprising, as the delivery was good, confident and pointed. The key issue, he said, was the referendum, warning Brown that "he simply will not restore trust in politics unless he keeps his promise to hold one," adding ominously that, "This issue is not going to go away."

Where there was a weakness, though, was not in the delivery, but in an omission which Brown was quick to identify, demanding of Cameron:

…if the Conservative party thinks that a referendum is so important, does it agree that even after ratification there would be a referendum? Some of the party think that there should be, but others think there should not. Will he tell us what his position is, because until he does so we will rightly say that he is all slogans and absolutely no substance?

That is indeed the weak point and, while Brown then resorted to the tired old mantra that, "the constitutional concept has been abandoned", there is no doubt that this retort is going to form the standard counter to demands for the referendum.

With Cameron on a roll, however, there is no telling how the inability to address this point will affect his Party’s fortunes, but there will be quiet voices throughout the land who want it answered. Like the referendum question itself, "this issue is not going to go away."