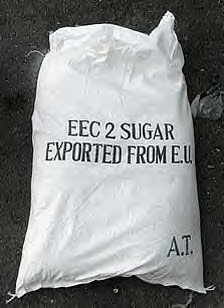 How useful it is to have blog readers who also attend to many other media outlets. Once again I register my gratitude to one of our readers who called our attention to this nifty little story. (As I am spending this week partly in South London, which is another country altogether, I have fallen behind in my reading and writing.)

So here is part 1 of the nifty little story, as published in the Jerusalem Post. Yesterday the Israeli announced that the IDF and Shin Bet had found “6.5 tons of potassium nitrate hidden in sacks that were disguised as aid from the European Union”. If we go by the picture, it was disguised as sugar but, clearly, something alerted the Israeli security services.

Potassium nitrate is banned in Gaza for obvious reasons. Oh all right, I shall spell it out. There is this rather unpleasant prejudice in Israel about terrorists in Gaza or, for that matter, the West Bank using the chemical for the manufacture of explosives.

The statement was very cautious about the EU:

This is another example of how the terror organizations exploit the humanitarian aid that is delivered to the Palestinian population in the Gaza Strip with Israel's approval.

24 hours later the EU denied everything. But before everybody choruses the words “Well, they would, wouldn’t they?” let us have a look at their argument.

The EU official, however, said that the bags could not be confused with bona fide EU aid for a number of reasons, including that the EU does not export sugar as part of aid to the Palestinians, and that food assistance to the PA - funneled through UNRWA or the World Food Program - clearly carries the 12-star symbol of the EU and the name of the European Commission on the bags.

Undoubtedly that is true. One cannot imagine that there might be a situation in which the EU omits the flaunting of those stars. There will be a lot more of it, as the EU is pledging another $650 million of aid in 2008. We wrote about all those fruit machine numbers here. 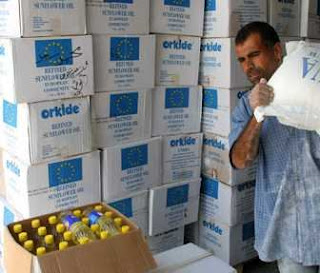 The question does remain as to who decided to use those carefully if erroneously printed bags for the transportation of potassium nitrate instead of sugar. There is some comfort to be taken from the fact that the bags were printed wrongly and the people who were trying to smuggle the chemicals through (or possibly into) the West Bank are a tad careless over certain details.

A little less comfort is to be taken from the surmise that somebody somewhere in the vast EU aid giving machine must have passed a certain amount of information on as to when and where sugar was going to be taken through (or possibly into) the West Bank.

Looking at it from another point of view, one cannot help wondering what other findings the Israeli security services will announce before President Bush’s forthcoming and probably completely pointless visit to the region.
Posted by Helen at 20:00