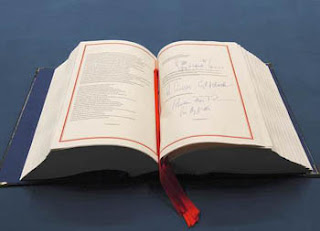 It is now official – or so the BBC says. Brown is definitely to miss the EU treaty singing ceremony but, we are told, will travel to Lisbon and sign it later. He is first to attend the Commons Liaison Committee hearing and then leave London straight afterwards, missing the official signing ceremony but in time to join the heads of government at lunch. He will then sign the treaty later.

Attending the actual signing ceremony will be David Miliband, who will add his name to the constitution treaty as the UK's official representative. No doubt, the "colleagues" can leave a space beside him, for Brown's image to be added to the official record, courtesy of Photoshop. And, if they need any advice on how to do it, this government has had plenty of practice and will, no doubt, give them some tips.