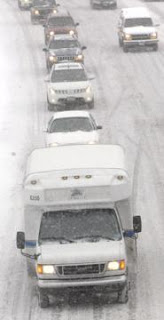 According to The Times, a brutal snow and ice storm has caused 11 deaths in the run up to Christmas, paralysing the American Midwest.

Gusts of icy wind reached almost 90 mph as they tore over Lake Michigan. Trees have been uprooted, tens of thousands of people were left without electricity, hundreds of flights cancelled and roads have been rendered virtually impassable.

Eleven people have been killed in series of road traffic accidents – the worst of which caused a pile-up of more than 50 vehicles including several tractor-trailer rigs in Texas.

Must be global warming! Time to call in the Goracle!