Meanwhile, back in Paris 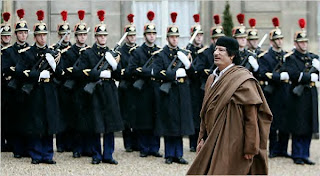 The new Constitutional Reform Lisbon Treaty may be all the news across Europe, except for the lorry drivers’ strike in Italy, drawing to a close and various strikes in Greece firing on, but French diplomacy if we can call it that, proceeds in its own inimitable fashion.

After lambasting the UN and various Western countries in Lisbon at the EU-Africa Summit that produced no results whatsoever (unlike the treaty signature yesterday, which produced the entirely foreseeable result of a fully signed treaty that had already been initialled) Colonel Gaddafi moved on, specially heated Bedouin tent, muscular female guards and all.

He is now in Paris with his tent in the garden of the Élysée Palace and went to the Assemblée Nationale. Here problems arose. It seems that a number of deputies felt that they could not meet somebody who was quite so tyrannical and had quite such contempt for human rights in his country. Rather odd, as I am fairly certain others of that ilk had visited France before and been welcomed.

However, the Socialists have decided that their honour would be besmirched if they had to shake hands with M le Colonel, as did a number of members of the ruling Union for a Popular Movement (UMP).

Further stormy scenes broke out afterwards in the assembly as opposition politicians walked out of a debate on Europe in protest.

Jean-Marc Ayrault, the Socialists' leader in parliament, said: "You do not roll out the red carpet for a dictator in the house of democracy."

Rama Yade, Sarkozy's human rights minister, denounced the use of torture and arbitrary arrest in Libya, saying France should not be a "doormat on which a leader, terrorist or otherwise, can wipe off the blood of his crimes."

Strong stuff. The former Socialist foreign minister, Roland Dumas, backed Sarkozy in this case, pointing out on no particular evidence, that Gaddafi is moving in the right direction.

Right direction or not, the real reason for being chummy with the man is not hard to seek:

On Monday, Gaddafi had been welcomed by Sarkozy at the Elysee presidential palace, where he initialled trade deals worth more than $14.7bn, including contracts for Airbus airliners, a nuclear-powered water desalination plant and construction projects.

In an important breakthrough for French arms manufacturers, Libya undertook to negotiate exclusively with France on a range of planned military purchases, including Rafale jets, helicopters, armoured vehicles and patrol-boats.

One rather wonders what the colleagues will say about much of that once they have recovered from their post-Lisbon celebrations.

Did President Sarkozy speak to Colonel Gaddafi about human rights in his country? He says he did, asking M le Colonel about the progress of those rights. Gaddafi appears to have different recollections:

Speaking to France 2 late on Tuesday, Gaddafi said: "First of all, President Sarkozy and I, we did not discuss these questions."

He told the channel that "human rights are not an issue in my country," which he said was governed by "direct popular democracy".

One thing about these African tyrants: they don’t exactly hide the truth.

Clearly, Sarko was feeling a little uneasy. It seems even the promised French trade did not quell the general outcry. So he asked his new best friend to say a few words about terrorism and what a bad thing it was.

Gaddafi duly obliged and denounced al Qaeda, which has claimed responsibility for the Algeria attack.

"What explains such an act. Can you say it is Islam? Islam would never think that. It is a criminal act that has no aim," he told France 24 in an interview late on Wednesday.

"We condemn terrorism, that is an issue that needs no debate," he said, adding that countries needed to hunt out the root of the problem. "It is an illness. We must know the causes to treat it and heal it."

A very admirable performance. Now that Al Gore has had his Oscar, could Hollywood give Gaddafi one? Surely he is anti-American enough.
Posted by Helen at 00:14