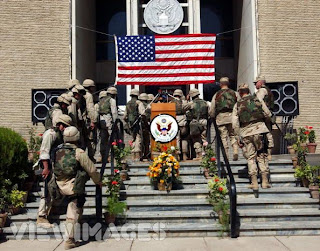 Hands up those of our readers who were surprised at the "generosity" of the Sudanese president in his "free pardon" for the school teacher who allowed a child to call the teddybear by his own name, Mohammed.

As Tammy Bruce sums up so aptly:

Nor am I impressed by the argument that she ought to have known about Islamic "sensitivity". If those children wanted to call their teddies Mohammed then they did not think there was anything wrong in it.

As usual, there was a slight gap between the "offence" and the Rage that, inevitably, appeared. Don't these people understand how stupid they sound screaming for the death of a nice primary school teacher because of a teddy bear? Mind you, with all the various hate laws now have in this country, could something like this happen here?

Now all we need to know is what the two Muslim peers (Ahmed and Warsi, neither of whom can exactly be described as moderate) promised the appalling General al-Bashir and how much it will all cost us in "aid".

The other story that has been causing a certain amount of interest is the horrific one of the Saudi woman, tricked into a car with a man who was not a member of her family then gangraped by him and his friends, one of whom apparently filmed it on his mobile phone, though that was not accepted as evidence in the court that sentenced her to sixty lashes.

The rapists may have confessed but were sentenced to short prison terms. When her lawyer appealed on her behalf the sentence was increased to 200 lashes, a fine and imprisonment.

The Saudi Bar Association (yes, there is such a phantom thing) then suspended her lawyer, Abd al-Rahman al-Lahem, a well-known civil rights advocate, for bringing this case to public attention through the media.

The lawyer is a brave man and the unfortunate woman, who has already been through a terrible experience is no less so.

And while there is a certain amount of support being expressed in the West for both of them, one has heard next to nothing from the great humanitarian organizations like Amnesty International or from any of of the feminist organization, not in Britain, not in Europe, not in the United States.

Where are they all? Do women's rights stop existing when they are in certain other parts of the world?

I am not the only person to have noted this fact. Tammy Bruce, a former leading light of NOW (National Organization for Women) has written a stonking article on the subject.

It makes me particularly happy to read her opinion, which is very similar to ours on this blog as to who has done most for women's liberation in those certain parts of the world:

There have also been a few organizations since 2003 that have done astounding authentic feminist work for women and children around the world, and in Afghanistan and Iraq specifically. The American military, without even a passing "thank you" from so-called feminist leaders Smeal or Steinem or Gandy, have liberated over 53 million people in Afghanistan and Iraq, with a good 25 million of those being women and children.

If the Marines were taking their orders from those so-called feminists, the same women who support and laud Hillary Clinton, those now free people would still be enslaved. The official position of America regarding the suffering of women around the world would be the equivalent of NOW’s ubiquitous “no position” position. It is the last appalling betrayal, and one that should condemn them to the dust heap of exposed hypocrites, pretenders and failures.