Well now, where do we stand on the Belgian government? 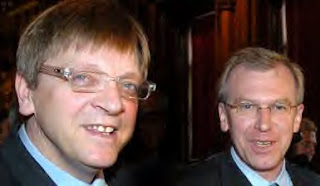 The alternate title could be “Will no-one rid us of this pestilential politico?” by which I mean Guy Verhofstadt. I bet the Belgians are saying that as well.

The outgoing Prime Minister, whose supposed successor has thrown in the towel, has been entrusted by King Albert to mediate some kind of a solution. He has been holding meetings with all sorts of people such as the putative new Prime Minister, Yves Leterme, he whose towel has been thrown in. [The two of them are pictured together here.]

In the meantime, M Verhofstadt, who is a member of the Flemish Liberals, has been given extended powers to form an emergency cabinet. As we have said before, with the EU providing most of the legislation and the regional governments taking up what is left, the absence of a federal government in Belgium cannot really be described as an emergency.

However, those are M Verhofstadt’s new powers and he is using them, allegedly, to negotiate new state reforms. All of which is fine and dandy but there is this Treaty signing coming up in just over a week’s time. You know, the Constitutional Reform Lisbon Treaty has to be signed.

Contrary to some opinions expressed by other bloggers, no Prime Minister has to be there. The Maastricht Treaty, as I recall, was signed by the Foreign Secretary, Douglas Hurd and the Financial Secretary to the Treasury, Francis Maude. In fact, if one looks through the signatories, they are all plenipotentiaries, signing on behalf of the heads of state and all foreign and economic ministers.

So the King of the Belgians will be represented by a plenipotentiary. But who is going to nominate said plenipotentiary? Can an emergency cabinet appoint a plenipotentiary to sign a very permanent treaty, which will more or less do away with the necessity for any more cabinets? A very pretty constitutional problems seems to be emerging.
Posted by Helen at 01:26