What's a ZERP between friends? 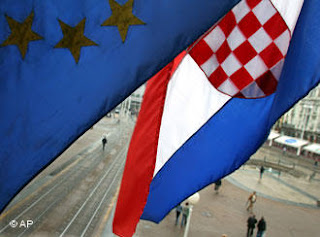 There has been much indignation in the corridors of our central government at the temerity of EU applicant Croatia in declaring a Protected Ecological Fishery Zone (ZERP) in part of its waters.

The zone partitions off some 57,000 square kilometres in the Croatian Adriatic Sea, necessary to protect fish stocks from the depredations of Italy's larger fishing fleet.

Leading the charge is EU Enlargement Commissioner Olli Rehn, who has warned Croatia not to implement the law putting the zone into effect, stating darkly, "It might have negative consequences on the negotiations process."

Hilariously though, the law is still set to come into effect on 1 January, if for no other reason than there is no way of stopping it. It was passed by the Croatian legislature in 2004 and, although it has been postponed numerous times, it will now be automatically implemented because there is currently no parliament - and one will not be formed by the implementation date. Thus, no political body has authority to step in and halt implementation of the law.

However, even if it could, it is unlikely to. The HSS-HSLS coalition, a centrist political union whose election votes will be decisive when the new government is formed, strongly defends the protected fishery and ecological zone - unlike the "green" European Union.

Any party that chooses to form a government with the coalition - as no party received the majority of the votes - will have to take the group's views on the subject into consideration.

More to the point though, Croatian politicians are not in the least bit intimidated by Brussels. In the words of one of the minority party representatives, Ivan Jakovcic, he blithely confirms that the ZERP will surely be activated on 1 January and that negotiations with the EU will not be frozen because "Croatia is very important for Europe".

Seems to me that Croatia is already fully prepared for joining the EU.