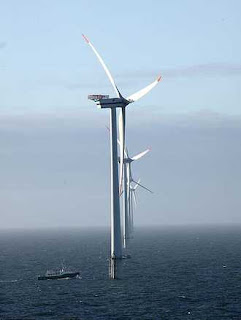 Following our rather elegant "cathedrals of insanity", it is Booker's turn to have a go at what he does not hesitate to call "the maddest single decision ever made by British ministers."

This was announced by John Hutton, Secretary of State for Business, Enterprise and Regulatory Reform, the startlingly insane plan to build 7,000 giant offshore wind turbines round Britain's coast by 2020, to meet our EU target on renewable energy.

No matter that Mr Hutton's officials warned him in August it was not conceivable that we could achieve even a much lower target, writes Booker, so keen was Mr Brown that Britain should "lead Europe on climate change" that Mr Hutton was told to ignore his officials.

The interesting thing is that, by and large, the media reported his claims without questioning whether such a megalomaniac project was remotely feasible, the New Statesman in fact lauding the "U-turn" on windfarms as "important".

What is especially interesting is that no one mentioned costs. Hutton spoke of his turbines, equivalent to one every half mile of coastline, as having a capacity of 33 gigawatts (GW), a hefty chunk of the 75GW of power we need at peak demand. But Booker has worked it out.

With the cost of giant offshore turbines, as tall as 850 feet, estimated at £1.6 billion per GW of capacity, this represents a bill of more than £50 billion - equivalent to the colossal sum earmarked last week by central banks to shore up the world banking system.

But of course the point about offshore turbines is that, because wind blows intermittently, they only generate on average at a third or less of capacity. So Mr Hutton's 33GW figure comes down to 11GW. To generate this much power from "carbon-free" nuclear energy would require six or seven nuclear power stations and cost, at something under £20 billion, less than half as much as the turbines.

This, however, is only the start of the madness. Because those turbines would generate on average only a third of the time, back-up would be needed to provide power for the remaining two thirds - say, another 12 nuclear power stations costing an additional £30 billion, putting the real cost of Mr Hutton's fantasy at nearer £80 billion - more than doubling our electricity bills.

Then that are a few other minor problems. Booker asked energy expert Professor Ian Fells whether it would be technically possible to carry out the most ambitious engineering project ever proposed in Britain, one which would require us to raise from the seabed two of these 2,000 ton structures every working day between 2008 and 2020.

So we turn to Denmark for an indication. With the world's largest offshore wind resource, it has never managed to build more than two a week, and marine conditions allow such work for only a third of the year.

But it does not stop even there. The turbines' siting would mean that much of the national grid would have to be restructured, costing further billions. And because wind power is so unpredictable and needs other sources available at a moment's notice, it is generally accepted that any contribution above 10 percent made by wind to a grid dangerously destabilises it.

Two years ago, much of western Europe blacked out after a rush of German windpower into the continental grid forced other power stations to close down. The head of Austria's grid warned that the system was becoming so unbalanced by the "excessive" building of wind turbines that Europe would soon be "confronted with massive connector problems".

Yet Mr Hutton's turbines would require a system capable of withstanding power swings of up to 33GW, when the only outside backup on which our island grid can depend is a 2GW connector to France (which derives 80 per cent of its electricity from nuclear power).

Nothing better illustrates the fatuity of windpower than the fact that Denmark, with the highest concentration of turbines in the world, must export more than 80 per cent of its wind-generated electricity to Norway, to prevent its grid being swamped when the wind is blowing, while remaining heavily reliant the rest of the time on power from Sweden and Germany.

The Danes, who decided in 2002 to build no more turbines, have learnt their lesson. We British have still to learn it. Every time we hear that over-used term "green" we should remember it has another meaning: someone who is naively foolish and dangerously gullible.

So says Booker, but Spiked online has a different "take". What is being agreed in all these announcements is not government action, it says, "but rather yet more planning interrogations."

In the housing sector, Spiked adds planning used to mean planning for more houses, but today it means preventing new houses being built. It is the same with energy.

The government now pursues offshore wind in the hope that it can avoid the fate of large onshore wind devices, which are caught in interminable objections by the Royal Society for the Protection of Birds (RSPB) and other aesthetically minded environmentalists. But New Labour exercises in planning and consultation already promise to kill nuclear energy stone dead, and will likely do the same for offshore wind.

Certainly, whichever way you look at it, Hutton's plan is not achievable – even The Guardian is sceptical – all of which would seem to suggest that we are dealing with a particularly mad form of gesture politics.

The bottom line is that this is designed to allow Gordon Brown can cosy up to his EU "colleagues" and tell them everything is in hand with his renewable energy plans. By the time it comes to deliver, he will be long gone, and David Cameron will be hooking his bike up to a generator to keep the lights on.